The College's traditions establish a sense of community that lasts beyond the confines of the four-year college experience. Bryn Mawr College students throughout the years share this experience with every person who attends the College. The traditions are more than entertaining, colorful spectacles that divert participants from the intensity of study; they help create a sense of community. Four of the traditions are campus-wide events that happen at specified dates throughout the school year. The four major traditions are:

A celebration of the completion of the first week of classes. The new students are introduced to their sibling class, the juniors, as well as to their adversarial class, the sophomores, and the apathetic seniors. Parade Night roles are based on the relationships defined by the classes. The incoming first-year students take the juniors as their sibling class. The sophomores are seen as adversarial, and the seniors are apathetic. Through this process, the juniors and seniors "mentor" the first year students and sophomores, respectively, until as juniors and seniors, they receive younger sister classes. These relationships are prevalent throughout the first three traditions. The first Step Sing of the year is held on this night.

In the fall semester, the first-year students gather and sophomores present them with their lanterns in their class color or the McBride color of purple. The sentiment behind Lantern Night is that the light of knowledge is being passed from one class to the other. It is a welcoming of the first-year students into the academic community of Bryn Mawr. The second Step Sing of the year follows the ceremony.

A week of fun and bonding between the first-year and upperclass students. It serves as a way to break the monotony in the time between winter and spring breaks, but more importantly, it serves as the true welcoming of the first-year class. Welcome-the-First-Years (or "WTF") Week provides a means by which people can get to know each other.

All-day celebration that occurs the Sunday after the last week of classes. The entire College community comes together for a day of medieval festivity and a general good time. May Day begins with the seniors rising to go wake the President of the College, followed by class breakfasts. Following breakfast, May Day gets kicked off with a parade that begins at Rockefeller Arch and ends on Merion Green. After the parade, there is Maypole Dancing. Each class gets a Maypole in its class color, and the McBride/Graduate Student Maypole is in the McBride color of purple and the College color of yellow. There are many events throughout the day, including Scottish dancing, Morris dancing, the traditional King Arthur Play, the sophomore class play, the Robin Hood Play, a cappella concerts, various cultural dancing and music displays, and there is always a large concert in the afternoon on the Merion Green. The last Step Sing of the year is held on this night.

The Traditions Mistresses, elected officers of the SGA, organize the four major traditions throughout the academic year and can be reached at traditions@brynmawr.edu.

The colors are dark blue, green, light blue, and red. McBrides are always purple, except that some may elect to mix the panes of their lantern with their corresponding graduating class color. Dark blue, light blue, red, and green were chosen as representatives of the four elements: water, air, fire and earth. The McBride purple lantern color was chosen to represent the human spirit.

The College cheer can be heard at various times throughout the year. As per tradition, only seniors may start the Anassa, but they may start it for any reason.

After all senior work is complete, each senior goes to the Taylor bell tower and rings the bell the number of her class.

The Owl in Rock Arch

In the center of Rockefeller Arch, there is a stone owl who is said to be the protector of the college.

The patron goddess of the college is Athena. Her statue is located in Great Hall. Students make offerings to Athena for her gifts of wisdom and strength when taking finals, writing papers, just asking for a little personal help, and innumerable other reasons.

Through the middle of Bryn Mawr's campus is a double row of trees known as Senior Row. It is the site of the May Day hoop race. At the end of Senior Row is the Moon Bench, which has its own associated traditional value. The rumor is, if you walk all the way down Senior Row in between the rows of trees before you're a senior, you won't graduate.

On the west side of Taylor Hall, facing Great Hall, are the senior steps. The only people allowed on these steps are seniors, and again, the threat is not graduating.

Possibly the largest of the minor traditions, garden party happens on the Saturday of graduation weekend every year. Each senior chooses a non-senior to be her "garden party girl." The garden party girl then chooses a spot on the lawn in front of Wyndham and Erdman and decorates it for the senior's family.

The moon bench is at the end of senior row. Superstition has it that you can't kiss someone while sitting on the moon bench or you will break up. There's also a legend that says if you do kiss your significant other in Rock Arch, then the relationship will last.

Upperclass students make invitations to teas, which are tied together and attached to the first year student lanterns before Lantern Night.

The night before May Day, seniors choose mementos to pass along to juniors, sophomores, and first-year students. Some of these gifts have been passed down for a very long time. The tradition is that, if the gift has been handed down more than once, you must hand it down again when you graduate. Gifts that you receive that have only been handed down once, you may keep.

When first-year students enroll, they are assigned to dorms, and each dorm is divided into a couple of customs groups. These are groups of frosh who spend Customs New Student Orientation together throughout the number of activities. Customs groups are led by sophomore "customs people," who live on the same floor as the frosh and are responsible for the general orientation of new students to the college. These groups remain together throughout the school year. Find out more about Customs New Student Orientation! 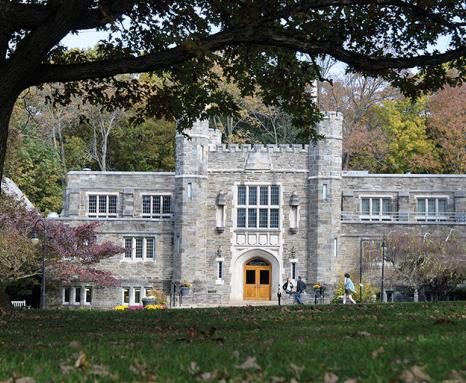