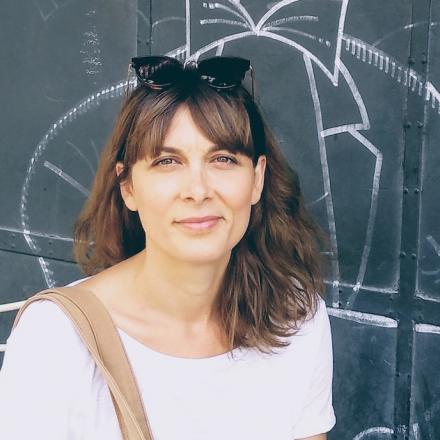 Daria Bozzato has recently joined Bryn Mawr College after teaching all levels of Italian language classes and interdisciplinary courses on the Mafia, Italian cinema, and Italian food culture at Gettysburg College, Kenyon College, and SUNY New Paltz. Educated in Italy in Portuguese Studies and in the pedagogy of teaching Italian to foreigners, in 2011 she moved to the US to pursue a Ph.D. in Romance Studies at the University of North Carolina Chapel Hill. Her dissertation examines the influence of theosophy, spiritualism, and the occult on Futurist oeuvre as a return to a primitive sensibility. As a consequence of her study on the effects of scientific discoveries on 20th-century Italian society, she is currently working on how photography was used in psychiatry before the approval of Law 180 (1978), also known as Basaglia law, to represent the alienation of mentally ill people in Italy.

Daria Bozzato’s ongoing conference activity and publications demonstrate her dedication to both Italian Studies and second language acquisition. In this regard, her research focuses on how experiencing food in class can be an asset to reduce students’ affective filter and create a diverse learning environment. To guarantee learning equality to all students and promote a more inclusive classroom, she started working on the publication of an OER elementary Italian textbook that will provide a more accurate portrait of contemporary Italian culture by focusing on issues such as LGBTQ+ rights, migration, and diversity.

Contribution to the revision of the vocabulary, culture, and music sections of Sentieri 3/e, Vista Higher Learning.

The Voice of the Pazzi: Madness in Italian Photography before 1978. Presented at the MLA International Symposium convention. Lisbon, Portugal. July 24, 2019.

Photography, Madness, and Marginalization: The Case of “Gli esclusi” by Luciano D’Alessandro. Presented at the AAIS convention. Winston-Salem, NC. March 16, 2019.

The Touch, the Medium, and the Primitive: New Perspectives on Marinetti’s Tactilism. Presented at “Bramosia dell’ignoto.” Prague, Czech Republic. April 15, 2016.