Berkeley, by Margaret Atherton ’65, is the latest addition to the Blackwell Great Minds series. Atherton, a scholar of early modern philosophy, examines George Berkeley’s most influential work and demonstrates the significant conceptual impact of his ideas in metaphysics and the philosophy of religion. One of the most important philosophers of the early modern era, Berkeley influenced later thinkers such as Kant and Hume. This concise and rigorous primer on Berkeley’s essential writings provides a firm footing in his wider body of published work in the canon of Western philosophy. (Wiley-Blackwell, 2019)

Atherton is Distinguished Professor of Philosophy at the University of Wisconsin-Milwaukee, where she has been teaching since 1980. She has published numerous articles in the history of early modern philosophy, and has special interests in the works of John Locke and George Berkeley, as well as in the philosophy of perception and the recovery of women philosophers. 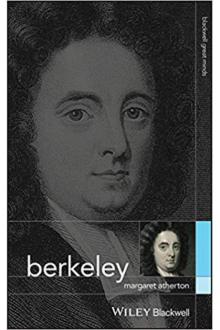