Bully Market: My Story of Money and Misogyny at Goldman Sachs by Jamie Fiore Higgins ’98 is a firsthand account of the author’s experience as a managing director at the Wall Street giant.

Higgins walked away from an 18-year career at Goldman Sachs in 2016. As a newcomer to Wall Street, Higgins says, she “quickly got caught up in the lavish world of money and excess, taking me further away from the career I had originally envisioned for myself.”  When she finally found the courage to leave, she decided to write about her experiences, to spark discussion about gender and racial equality in the workplace, and create change. “As the #metoo movement unfolded before my eyes,” she says, “the seeds for Bully Market were planted.”

Journalist Gretchen Carlson described  the book as: “a riveting and powerful story of one woman’s experience in finance, as she climbs the corporate ladder amidst harassment and discrimination. You might argue that this book isn’t even about Goldman Sachs, but about the behaviors and patterns we’re willing to accept across allof corporate America.” (Simon & Schuster, 2022) 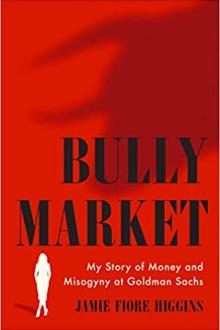