Casting Off the Lines

A Brooklyn-born land creature, I was reluctant but acquiescent in 1976 when boyfriend-now-husband Gary proposed buying a 35-foot motorboat. “As long as we don’t have to spend every single weekend on it!” (And I made him promise.)

But reluctance was his when, 21 years later, our best friends announced they were retiring to the Caribbean on their sailboat.

“If I’ve gotta cast off their lines and wave good-bye,” said I, “I’m gonna be miserable—and if I’m miserable, you have no idea how miserable you’re gonna be!”

And that’s how two strangers to sail-boating ended up buying a 61-footer! Gary sold the business, I quit my newish feature-writing career, and we took off alongside the friends in 1999.

Oh, and sailing? We learned on the new job.

Five thousand miles and two years later, we’d breezed through most of the Eastern Caribbean islands, sailed deep into Venezuela, and over to Cartagena. In two more, we waved at the Panama Canal, sailed and scuba-ed the Western Caribbean, made landfall in Florida, sauntered up the East

Coast, and came back to home base to kiss the kids and growing grandchild population. We had 10,000 miles under the keel. LULU got some repairs and reupholstery—then we took off and circumnavigated the Caribbean yet again.

One year in the Caribbean turned into 11. In October 2010, LULU got hoisted onto a transport bound for Spain. We flew to meet her and spent that first winter living aboard in the center of splendidly idiosyncratic Barcelona. Glorious but chilly--ever since, we’ve returned to Manhattan for winters and cruised the Med from May to October.

For the last decade (minus a land-based COVID-19 2020) we’ve sailed, motored, schlepped, and drifted through Spain, Tunisia, Sardinia, Elba, down both Italian coasts, over to Malta, Sicily, Croatia, Montenegro, Albania, Greece, and Turkey. Most exciting of all? Sailing LULU down the Grand Canal, past St. Mark’s, the Doge’s Palace, and rococo La Salute.

But this cruising life isn’t all cathedrals, calamari, and popping paper umbrellas into piña coladas. Sudden storms and big winds overtake you and other boats bang into you.

Living aboard is also hard work—ever washed and waxed the inside and outside of your house? Metal parts rust, while water makers, generators, pumps, myriad mechanical and rigging systems break. Constantly.

Gary can fix anything…and has been put to rigorous testing. We discovered lightning does strike twice—in fact four times to LULU over 21 years. Scary, but luckily just wiping out electronics and machinery. I can see 20-plus years of fixing the boat in exotic places is suddenly daunting my 83-year-old husband.

Among the other pitfalls of boating are, well, falls. With my recent proclivity for thin skin and the timeworn cobblestones and steep inclines of European seaports, I’ve sampled the medical systems of almost every country we’ve passed through and found them mostly adequate—though I refused surgery categorically when I broke my ankle running off to pay for some silver bauble in Kea, a Greek island with no X-ray machine.

Multitudes of wrinkles, hundreds of mediocre burgers, tons of scrumptious fish, thousands of corks, millions of laughs, and some 75,000 nautical miles later, though, our bodies are telling us it’s time for a safer, less taxing environment, closer to home.

Nothing will keep that day from being one of the saddest days of a very full life.

On the other hand, it may mean I’ll get to see some of you at a future May Reunion! 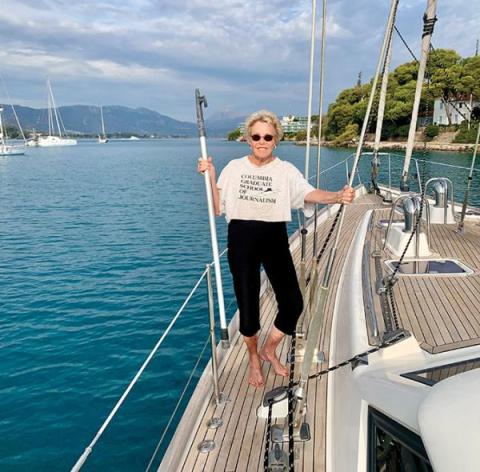