Madeline Cantor, who retired this spring as director of Bryn Mawr’s dance program, came to Bryn Mawr in 1989 after being hired by Professor Emerita Linda Caruso Haviland, with whom she had a long and fruitful collaboration. Cantor developed several signature programs at the College, including the School Performance Project, through which dance students present performances in Philadelphia area schools. Cantor also brought to Goodhart Hall reconstructions of classic modern dance works by Paul Taylor, Martha Graham, and others. Cantor became director of the program in 2019, a few months before the COVID 19 pandemic hit.

What was the dance program like when you came here in 1989?
It was very small, and it consisted of one person—Linda Caruzo Haviland. She did everything. She taught, she administered, she made costumes. She really established it. She was here when the office for the arts was founded, which is what brought together dance and theater, and the BiCo program in music. That established the identity for the arts on campus. One of her first acts was to hire me as an associate. We had this long partnership, a rare collaboration. We were “work married.”

What makes the Bryn Mawr dance program distinctive?
The heart of the program is the actual dancing. This is about the life of the body, so it's not just talking about dance or looking at it, it's about doing it. Over time, we’ve developed a program that has four components: dance technique, which is what most people think of when they hear the word dance; performance, with an annual big deal concert involving the more advanced student dancers on campus and professional guest choreographers; theory and practice of dance making; and dance studies, which are academic courses that look at dance from multiple perspectives as a social force, a way of knowing the world, a science.

What would you say is the value of teaching dance in a women's college?
There’s less gender noise here. Another thing is that the women get to do things in dance that are traditionally reserved for men such as lifts.

Tell me about the students you’ve taught.
This is a place where you can be committed both to excellence in academics and in dance. We don't get the students who want to do a straight-ahead conservatory thing and take 16 classes a day. Our students want to do lots of things. Some of our most advanced dancers are biology majors, history majors, and that's the great thing about being here. The ones that come here, some of them come in with very significant training. And then there are others who did something in their high school years and were intrigued by it.

What has impressed you most about them?
It's their energy and interest, their intellectual strength, their ability to juggle multiple interests. What I particularly appreciate about them is their ability to see dance in a larger context. We give them that opportunity through these other courses, and they take it. It's not just how high can you get your leg. It's far beyond that. Dance is a way of understanding the world around you, a way of understanding yourself, a way of understanding others. It's tied into social and emotional learning in a pretty unique way because the body is at the center of it. The whole body-mind split is something that we, as dancers push back against. The body is a mind. The mind lives in the body. It's not a shell. It is a source of information, of knowledge, of insight of connection.

How was your experience during the pandemic?
Everybody left in the spring of 2020 and in the fall of 2020, because of the extraordinary efforts of the facilities office, we were able to come back live and full. No other program that I know of in the country was able to do that, that early and that fully, and it had to do with the way systems work here. We were initially told the studio was offline. I appealed that and they did some serious mitigation, and we came back. I'm very appreciative of how when you need something here people care.

In general, things just work well here, like housekeeping. For example, you have to clean the floor in the dance studio in a particular way. There's a special solution that has a little bit of rosin powder in it, so that it's not slippery. But you don’t want it too sticky, so you have to get it just right. So I’ll leave a little note saying, ‘Can you add a little bit more? Maybe another capful?’ And they do it. They’ve come to care about it. This is not typical in institutions.

What are you most proud of having accomplished at Bryn Mawr?
I’m proud of the praxis courses that I developed. I created something called the School Performance Project where we presented performances in Philadelphia area schools. We did over 200 of them. The project had at, at its core a narrative dance, a story dance based on obscure or even invented folk tales. Those pieces, which were designed for young audiences, have become a sort of niche I've taught. I’ve done them as a guest choreographer in Seattle, New Jersey, and New Mexico. It's an unusual niche to have choreographically and is somewhat in demand. I'm very committed to putting high quality artwork in front of children.

I’m also proud of the extraordinary faculty we have gathered. Philadelphia is a very rich dance city, so I didn't have to go far to find great people. My job as director has been to give them what they need and then step back and let them do what they do.

And I have to say I’m proud of the series of reconstructions we’ve done here. These are restagings of classic modern dance works. Just two weeks ago, we did a Paul Taylor work. That was my seventh reconstruction. I also did a Martha Graham reconstruction. These are licensed works, so you have to get the rights to perform, and they’re taught by someone who has had serious engagement with the work, typically somebody who was in the company who is recently retired. I wanted to give students the opportunity to dance their history. A music student can open up a score and play something that was written in 1680, no problem. We can't do that in dance. Not only because of the difference of notation, but because it's taught body to body. I did it when I was a young dancer and it's just an extraordinary experience.

When did you first know that you were a dancer?
I was very young. I don't know that I would have described it that way, but I knew that patterns and movement were fascinating to me. The way movements fit together. When my father came home from work, he wanted me to get his glasses from his bedside table, and so I developed a dance of how I would run to the staircase, run up two at a time with a certain pattern, run to the bed, dive on the bed, grab them, and come back down. That was my first piece of choreography. I wasn’t one of those dance babies who had a million classes. I danced in college but didn’t major in dance and found my way to some extraordinary teachers who I followed and were really influential.

Also, the notion that dance is just for some people is something we have to fight against. It’s for everybody, including people in wheelchairs and people with Parkinson's disease and 5-year-olds and 80-year-olds. Dance is a social event, a social activity, as well as an artistic ability. 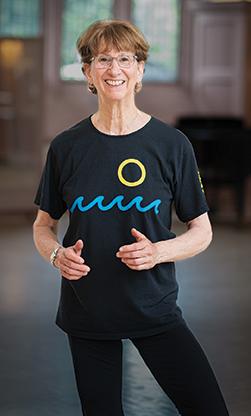