Sprinting around campus when Barack Obama won in 2008, I finally ending up with a bunch of us squeezed into a friend’s basement room in Erdman. Everything felt possible. The next morning, I wrote a hopeful letter to the Alumnae Bulletin as a Kenyan current student, expressing what it felt like for a country whose very first Black American president had Kenyan ancestry like me.

Among the responses to my letter was a neat card that arrived at the BMC Post Office addressed to me. It was the first of many letters I got from Jean MacIntyre ’56, and in it she expressed her appreciation for my letter, and delved into her own passion for educating girls in western Kenya through the Canadian Harambee Education Society (CHES). I had just started researching organizations that supported girls’ education for possible future work in Kenya and maybe elsewhere in Africa. I have always been a great letter writer, and we struck a correspondence.

A 2009 grad, I struggled to find a job after the 2008 recession. While clearing out of campus, I had sent her a May Day poster from our senior year, which she had framed by a friend, a BMC ’73 Ph.D. history of art major, and hung proudly by her Bryn Mawr B.A. and Yale Ph.D. degrees. As a postscript, I shared my job-hunting concerns. More than once, she asked after me, all the while sharing stories of her summer travels enjoyed with the friends she broke bread with, the causes she was raising money to support, and the adventures of her cats whom she loved.

Through a Career Services noticeboard, I found a research coordinator role in downtown Philly in July 2009, and that fall, after hours, I set upon applying to graduate programs. That same year, I shared tales of searching for an affordable rental in Philly and the 2006 Mawrter friend who eventually connected me with a room share in Manayunk, not far from the Schuylkill River.

She wrote: “I’m so glad you are landing on your feet every jump you make. But then, only a very few Bryn Mawrters lack the enterprise and resilience to do so. Looking back, I wonder how I made so many blind jumps that turned out to be exactly the right ones, when my character then felt close to the white mouse or White Rabbit even as I took all those leaps not knowing what was on the other side.”

Finally, in 2010, when Jean came to Philly for Reunion, we finally met in person. A city bus driver on his break used my cellphone to take our now historic picture in Old City, Philadelphia, and after she left campus, on June 2, 2010, she asked me to be her honorary granddaughter. The picture traveled quite far, after the Bulletin first placed it in a feature about Jean in the Fall/Winter 2011 issue. The summer went by in a blur, with my continuing search for additional graduate funding making me weary. All her emails to me ended with “… courage, mon amie,” as she shared her own search for additional funding for her CHES girls and for the Canadian Federation for University Women, for which she raised funds for women seeking higher education in Edmonton.

Over the next years, she made sure I was spoiled owl-rotten, as she indulged my love of owl memorabilia. From her travels, she shared art from First Nations creators across Canada and, from her hands, warm winter socks she knitted for all her favorites. I feel spoiled and grateful for her generous heart and hands. The last time I saw her, in 2017, she had extended her trip to Scotland with a leg in Düsseldorf to make her first trip back to Germany since the 1970s and ended up being my first Mawrter dinner guest.

Josephine Karianjahi, originally from Nairobi and now based in Düsseldorf, works as a partnership, communications, and advocacy consultant focused on Sub-Saharan Africa (including Botswana, Kenya, Ivory Coast), Germany, and the U.S. Stay in touch via josephinekarianjahi.com. Jean MacIntyre, a scholar of Renaissance English literature at the University of Alberta, passed away in February 2020. 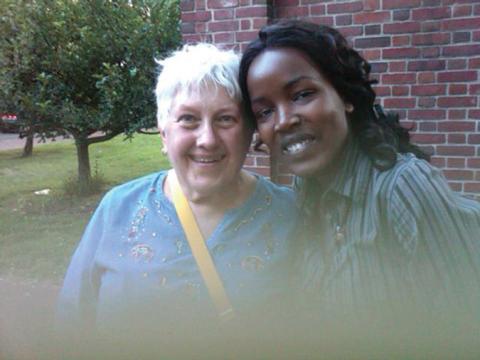