Home Is Where the Art Is

A fellowship gave this Ph.D. candidate the chance to delve into a house designed as a work of art.

“I’ve always been interested in material culture and in objects and in how objects are lived with,” says Nina Blomfield, a doctoral candidate in art history. While pursuing her degree at Bryn Mawr, Blomfield has spent plenty of time getting to know some fascinating objects in the College’s collections, including late 19th-century furniture designed by Lockwood de Forest for the College, around which Blomfield created an exhibit in 2019. This summer, Blomfield relocated to the Detroit suburbs after being named the 2021-2023 Decorative Arts Trust Marie Zimmermann Resident Collections Fellow for the Cranbrook Center for Collections and Research.

How does this fellowship align with your research focus?

I’m really interested in domestic interiors and how people put them together as works of art. My main project while I’m here at Cranbrook is to take care of Smith House, which is a Frank Lloyd Wright-designed house that Cranbrook took ownership of in 2017. Wright is the figure that comes to mind for most people when they think about how Japanese design came to be used in American homes, and that’s a trend I’ve been thinking about for a really long time.

So, the house intrigued you?

Yes, but as I read more about the family who lived in this house, the Smiths, I became even more interested. They were Detroit schoolteachers who didn’t make a lot of money, and I’m really curious to know why they wanted to live in a work of art and how they came to create that for themselves—how they scrimped and saved and collected objects over the years. It’s the middle-class aspect of the Smith house that is really fascinating. It’s not just a story about Frank Lloyd Wright; it’s a story about the Smiths and their whole lives living together in the house.

Photograph of the Smith House by James Haefner. Courtesy of Cranbrook Center for Collections and Research, Bloomfield Hills, Mich.

Tell me a little about Cranbrook.

It was founded by George Booth, who ran the Detroit Free Press. He wanted to create an aesthetic environment for learning at the turn of the 20th century, in some ways quite similar to Bryn Mawr. It became a hub of modernism in the ’20s and ’30s because Eliel Saarinen came out here from Finland and built the beautiful Saarinen House and designed the campus buildings. Charles and Ray Eames were here, too, and it became this incredible community of design thinkers.

What does your fellowship involve on a day-to-day basis?

I’ll be developing a publication for the Smith House, and also I’ll be doing the same kind of behind-the-scenes stuff that I had been doing for Special Collections at Bryn Mawr—cataloging and making assessments of the cultural properties at Cranbrook. I’ll also be doing tours for the houses and some donor relations work, which is something I haven’t done before at Bryn Mawr, but I’m excited to do here because it’s so important for keeping museums alive.

How has your time at Bryn Mawr prepared you for this opportunity?

Having a strong training and a broad art historical foundation from Bryn Mawr was a major factor in being prepared for and being awarded the fellowship. And then of course all my work in Special Collections with Carrie Robbins has been a tremendous foundation. Even though my academic focus has mostly been on Victorian work, I‘m excited to get into this mid-century moment and to absorb all this information. The Ph.D. program at Bryn Mawr really teaches you how to teach yourself.

Public tours of the Smith House are offered May through November. Private tours and group tours are also available per staff availability. To reserve a tour, visit center.cranbrook.edu, or call 248.645.3307 for more information. 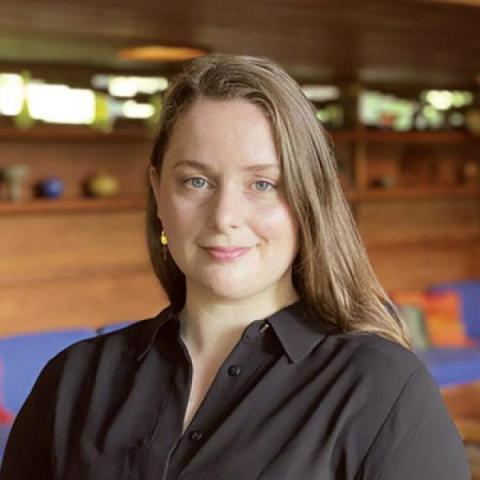 Graduate Program in History of Art
More from Fall 2021