In July 1959, my mother Saroja boarded a plane for the first time, making her way from South India to New York. The journey took three days. She was 23 years old and had never lived on her own.

Leaving India came about by chance. Just before graduation from medical school, a classmate told her about a program for foreign doctors to work in the U.S. With few connections or prospects for work in India, she had little to lose by applying. That quixotic decision led her to a hospital in Brooklyn to work as a pediatrician.

Before 1965, U.S. immigration laws were designed to exclude non-Europeans, so Saroja (pictured below) was a guest worker with a five-year visa. In the next few years, she met and married my father, also an Indian doctor, and gave birth to me. When their visas expired in 1964, they got jobs at a teaching hospital in Nova Scotia. But as in the U.S., Canadian immigration policy prioritized Europeans. When my mother applied for a senior position, the chief of pediatrics told her “You have the background, Saroja, but we need to give this job to a Canadian boy supporting a family.” Seeing few prospects, they decided to return to India in 1969. 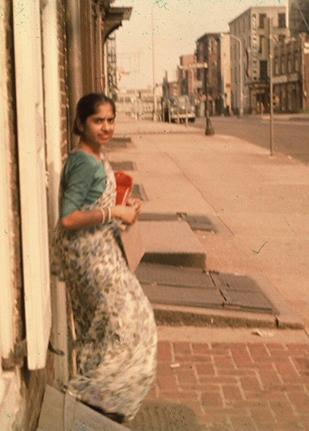 In India their North American training and board certifications and my father’s American Ph.D. counted for nothing, so they started over as junior doctors. Jobs were erratic and low-paid. They applied to emigrate to the U.S. under the new laws. After three years their applications were accepted. Thus, at the age of 9, I arrived in New York, an immigrant to the country of my birth.

Given such a peripatetic childhood, it might seem that I would establish roots somewhere. Yet I am now on my fifth migration and eighth country of residence, Costa Rica. My work on human rights has taken me to many countries for short- and long-term stays. When I visit the U.S., I revel in seeing family and friends, but I am an outsider there, too.

My new home is known for pristine beaches and rainforests, but Costa Rica also has the highest proportion of foreign-born residents in Latin America. The vast majority come from Nicaragua, with Venezuelans, Colombians, Salvadorans, and Haitians, among others.

Nicaraguans have been coming to prosperous and stable Costa Rica for many years. They take jobs Costa Ricans see as too onerous: picking coffee, construction, food processing and, especially for women, cleaning and domestic work. In 2018, a brutal crackdown in Nicaragua caused a wave of political dissidents to join the many Nicaraguans already working here. After 2020, these different waves of Nicaraguan migrants faced the pandemic in Costa Rica while having to support families who were in desperate circumstances back home.

"When I asked whether people can identify her as Nicaraguan, she pointed to her arm and laughed, “Soy morena” (I’m dark-skinned).'"

Seeing the ways that care work has been undervalued during the pandemic has inspired my research into Nicaraguan migrant women who are domestic workers in Costa Rica. I have been interviewing Nicaraguan women to find out how they support their families and manage their own care duties. I met Nelia, a housekeeper at a hotel, on the beach. When I asked whether people can identify her as Nicaraguan, she pointed to her arm and laughed, “Soy morena” (I’m dark-skinned). To my foreigner’s eye, she looked no different from local Costa Ricans. I glanced at my own arm, a darker coffee to her golden brown. Nelia spoke of the ways her children were singled out and bullied in school as “Nicas.” Yet both she and her children have better prospects in Costa Rica than in Nicaragua. The average income here is more than double that of Nicaragua—and coming to Costa Rica rather than the U.S. avoids language barriers and the perilous journey north.

During the pandemic, some politicians in Costa Rica blamed crime and disease on the “nicas.” The story was more tangled, with COVID-19 affecting Nicaraguans more due to the crowded conditions in which they live and work. Still, they were scapegoats. In April 2020, Vice President Epsy Campbell Barr shared photos of herself with immigration officials armed with assault rifles along the Nicaraguan border, with the caption: “What we are doing here is protecting ourselves ... the people who live in our country.” Her message clearly “othered” the Nicaraguans as dangerous criminals.

Studies show that Nicaraguan migrants contribute disproportionately to employment and wages of Costa Ricans, especially of highly skilled Costa Rican women. In a country with a stark household gender division of labor and a lack of institutional childcare options, few Costa Rican women would be able to work outside the home without their Nicaraguan empleadas. With a fertility rate of 1.8, less than replacement, Costa Rica needs the labor. But as in the U.S. and Europe, demonizing migrants allows politicians to distract the public from their own failings.

Looking Indian and speaking Spanish makes me an exotic curiosity, neither resented as a migrant from a poor country nor seen as a “gringa” or stereotypical American.

As I write this, the world is witnessing the largest movement of people since the Second World War with the exodus from the war in Ukraine to join those from Venezuela, Syria, Afghanistan, and so many other places. The global architecture and laws related to human movement are relics from the post-World War II and Cold War eras when “political” and “economic” migrants were easier to separate, as were the terms “voluntary” and “involuntary.” In a world with people fleeing a mix of natural disasters, war, climate change, and poverty, those distinctions are not so clear.

Sometimes the Nicaraguan women I interview laugh when they see how small I am, telling me “Eres como nosotras!”—you look like us. But the similarity ends there. I came to Costa Rica with the privileges of a first-world citizen with choices. Looking Indian and speaking Spanish makes me an exotic curiosity, neither resented as a migrant from a poor country nor seen as a “gringa” or stereotypical American. My appearance allows me to float in my own category.

My ease of mobility comes from my parents’ perseverant migrations. I am not fleeing political oppression, the effects of climate change and war. While I understand the loneliness and psychic demands of leaving and starting over, my experience is cushioned by an elite education and the freedom to choose where I go. Yet I am drawn to the migrants I interview, to understand the process of reinvention and the urge to leave everything familiar and transform.