The Graduate Group Symposium sheds light on the idea of darkness.

Integral to human physiology, the dark of night has also been imbued with symbolic meanings across cultures and over time.

Irresistible Night, Ageless Dark, the 12th Biennial Graduate Group Symposium at Bryn Mawr, set out to illuminate some of the ways human beings have understood and constructed the idea of night.

A biennial event sponsored by Bryn Mawr’s Graduate Group in Archaeology, Classics, and History of Art, each symposium is organized and led entirely by graduate students with the goal of facilitating interdisciplinary scholarship among graduate students in archaeology, classics, history of art, and all related fields.

The student speakers shed light on representations of darkness in the ancient world. In his talk, Robert Barnes, M.A. ’16 (classics), discussed Longinus’s use of night and day imagery in On the Sublime. Barnes argued that by echoing the experience of the initiation rites of the Greek mystery religions, Longinus’s dark-light imagery “initiates” readers into the experience of sublime style.

In her address, Jenni Glaser (classics) explored intersecting lunar imagery in Aristophanes’ Clouds and Lucian’s Icaromenippus. Noting that Lucian observed Aristophanes’ preoccupation with the moon in Clouds, Glaser argued that Lucian ties the two works together through the figure of the moon and thus invokes Aristophanes’ invective against philosophy in his own critique.

Zachary Silvia (archaeology) spoke about the symbolic significance of lapis lazuli in ancient Mesopotamia. Imagined as the constituent material of the celestial night sky—the domain of the supreme deity Bel-Marduk and the primordial source of universal knowledge—lapis derived symbolic power from the cosmos and was thus prized for its divine properties.

Participants didn’t leave contemporary culture out in the dark. Emily Leifer, M.A. ’18 (history of art), explored the phenomenology of Maria Nordman’s 1973 Saddleback Mountain site-specific installation. Through the use of light, darkness, and time, Nordman’s darkened chamber asks viewers to reconsider their subjective place in the world and also the material realities of their interaction with the natural environment.

Taylor Hobson (history of art) examined Between Darkness and Light (After William Blake) by the Scottish video artist Douglas Gordon. Simultaneously projecting two films—"The Exorcist" and "The Song of Bernadette"—onto one screen, that work is a competition of light and dark that incites not only confusion but also moments of illumination, as when a dimly lit scene of one movie allows for clarity in the other.

On the closing night, Columbia University Professor Noam Elcott delivered a particularly timely keynote. His remarks—A Brief History of Artificial Darkness and Race—addressed the role of “artificial darkness” (photography, theater, cinema)in the perpetuation of racial stereotypes and discussed how the use of technology in these mediums promoted Reconstruction-era civil rights for Black Americans. 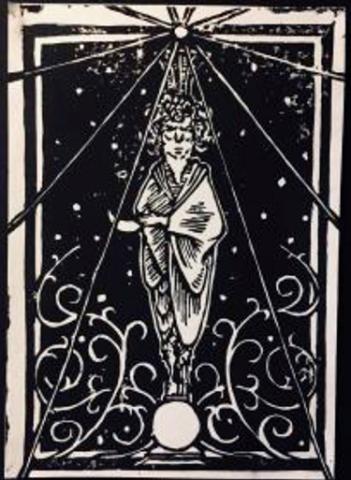 Linocut print created by Zachary Silvia for the conference.

Graduate Group in Archaeology, Classics, and History of Art

The Art of Darkness

Symposium organizers invited performance artist Nishat Hossain to contribute a piece that challenged the very genre of the academic conference. As she explains, “I take on the persona of an aspiring humanities professor, who is an up-and-coming artist on the side, to deliver a lecture on ancient Indian contributions to astronomy.” Her piece, A History of Darkfinding, juxtaposes an academic lecture with self-care rituals designed to address the colonial institutionalization of capitalism, art, science, and academia itself.