When the war came, two Mawrters traded excavation for espionage.

Known in archaeological circles as an excavation architect and numismatist, Dorothy Cox (Class of 1914) has another claim to fame: She was one of the archaeologist-spies recruited by the Allies during World War II.

Fluent in Turkish, Greek, and French, she had been battle-hardened as a nurse in World War I, and, as a 20-year veteran of digs, she knew the terrain. Taken by her intelligence, adaptability, and willingness to fade into the background, her OSS trainers recommended her without qualification.

She was, it seems, the perfect spy. The only problem? She was a woman.

Still, she soldiered on, filing regular reports on interviews with Greek refugees, enemy deserters, and special agents who had washed up in Izmir, Turkey. Despite all that, the Greek Desk back in D.C. paid her secretarial wages and ignored her pleas for supplies and feedback.

Later in the war, “the best man we have in Turkey,” as one of her superiors described her, landed in Egypt to organize relief efforts and gather intelligence from people displaced by the war—wounded soldiers and civilians, rogues and refugees. In the relaxed atmosphere of her Cairo apartment, they talked to the unassuming American: “Under the influence of Turkish coffee and cigarettes, especially American,” she reported, “they told what they knew and drew maps, diagrams, etc.”

Cox returned to the U.S. in 1945 for a job as curator of coins in Yale’s classics department. In the 1950s and 1960s, she was reunited with some of her fellow archaeologist-spies on digs in Gordion in Turkey and Balkh, Afghanistan.
In 1953, she retired to her Connecticut farm, where she lived until her death in 1977.

Virginia Grace ’22, M.A. ’29, Ph.D. ’34, studied amphoras—the long-necked jars used to transport and store wine and olive oil—and their stamped handles. And it was her insight that introduced their use in dating sites and understanding ancient Mediterranean trade routes.

She spent the early years of World War II on a dig in Cyprus before fleeing to Alexandria. Within the year, she had landed in Turkey, where she ciphered and deciphered code for the OSS and working with field agents.

She served briefly in the field, gathering intelligence on the island of Lesbos and, in the waning days of the war, was charged with closing down the Izmir office—settling accounts and burning papers.

Post-war, Grace was a visiting member at the Institute for Advanced Study in Princeton, but Greece called her back. In 1949, she returned to Athens and lived there until her death in 1994.

The stories of these two remarkable Mawrters are drawn from Classical Spies:  American Archaeologists with the OSS in World War II Greece, by Susan Heuck Allen (University of Michigan Press, 2013). 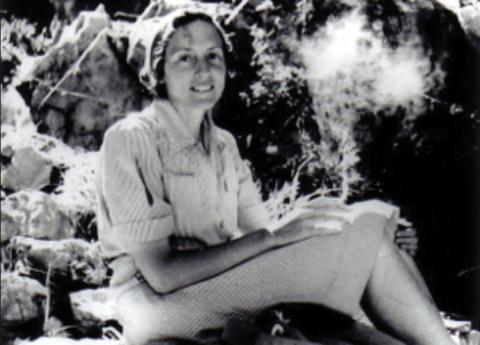