Chief Judge Beryl A. Howell ’78 spoke to the Class of 2020 at the August in-person celebration.

“This past year has often called to mind an observation made by Renata Adler '59, a fellow Bryn Mawrter. She was also a philosophy major who went on to law school, like me. But she then become a journalist and a book writer. She wrote, ‘None of us is living quite the life we were at all prepared for.’ As chief judge leading a very busy trial court in our nation’s capital, I can attest that consulting with epidemiologists, public health officials, and airflow safety experts was not something any of my own legal training had prepared me for.'

"Some historical events serve as an accelerant for changes, not just on a personal level for each of us but on a larger scale across a society. And the COVID-19 global pandemic may well mark the dramatic beginnings of such a moment that is still not over. Academicians in multiple fields, from political scientists and cultural anthropologists to historians and our sociologists and social workers, will likely be having a field day for years to come processing the changes underway here and across the globe.

"Some accommodations first made in response to the COVID-19 pandemic are likely to take hold as routine with no return to whatever a pre-pandemic normal was. This has happened before. Some academics have pointed to the double-whammy a century ago of the 1918 Spanish flu pandemic and the First World War as promoting such divergent developments as modern evangelical Christianity and modern architectural styles, inviting more sunlight into our living and working spaces.

"When organized church services closed during the Spanish flu pandemic and disaffection with mainstream religion rose along with the death rates, many people turned to a more fundamental version of faith. At the same time, they gained a new willingness to share and spread their faith through mass communications like the then-new-fangled technology of radio.

"Many people also turned full-bore to science for answers to explain what was happening. Understanding that the flu was transmitted through airborne droplets made more dangerous indoors led to a new appreciation of the outdoors and the disinfecting powers of sunlight. This new thinking energized the so-called sunshine, or open air, movement at the time and led to changes in architectural styles with skylights and big windows and a new aesthetic where sunbathing and tanned skin were viewed
as healthy and even chic.

"So, the big pandemic of the last century is credited with exerting a very wide influence, from changing how many people worshipped to the style of buildings we live and work in, and even our aesthetic views of beauty.

"Now, a century later, we must ponder a similar question. What influences will this century’s big pandemic have on our own future?

"Emily Greene Balch (Class of 1889), a Bryn Mawrter who was an economist and leader of the peace movement through World War I and II, said in her lecture marking her acceptance of the Nobel Peace Prize in 1946: ‘It is natural to try and understand one’s own time and to seek to analyze the forces that move it. The future will be determined in part by happenings that are impossible to foresee. It will also be influenced by trends that are now existent and observable. We speculate as to what is in store for us, but we not only undergo events, we in part cause them or, at least, influence their course.’

"Even as historical forces circulate around us, we still hold some control over how we choose to live and thereby influence the course of history.” 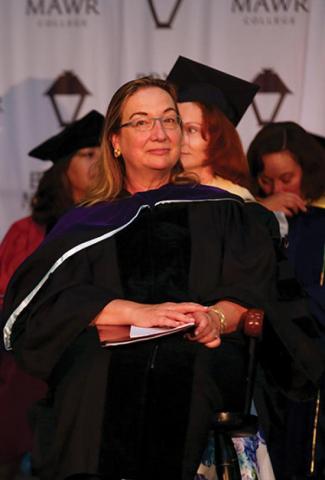