Pets on the patio, ethics in data science, and more 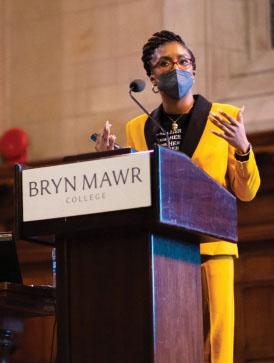 Shawna Murray-Browne, who delivered Bryn Mawr’s Black History Month Keynote address this year, used her own story of reclamation to inspire audience members. When her brother Darrell, who had been imprisoned, was found dead in his cell, authorities charged his cellmate with the crime. Murray-Browne, though, always saw his death as a state-sponsored act of violence and considered the true murderer to be the criminal justice system.

In telling her story of coming back from this tragic event, Murray-Browne interwove life lessons from three Black cultural and civil-rights icons: Ida B. Wells, Rosa Parks, and Maya Angelou.

Wells, said Murray-Browne: “set the understanding, the belief, that life’s tribulations are an invitation to transform. No matter what hardship or experience you’ve had in your life, it is an invitation for you to transmute that fire into fuel to change the world.”

It was the wisdom of Angelou that finally allowed Murray-Browne to begin to reconnect with others.
“What Maya Angelou is teaching us is that we have to let the love in,” Murray-Browne said, “So, if you’re struggling, you feel overwhelmed, you feel like you can’t see a way through, you’ve got to talk to somebody in your village and community.”

Murray-Browne also drew sustenance from the wisdom of Rosa Parks. In a letter to Congressman John Conyers, for whom she had once worked, Parks detailed the many activities she had planned and added at the end, “and then I’m going to rest for a few days.”

“Rest is resistance,” said Murray-Browne. “You have to establish a practice of rest if you’re going to reclaim yourself. … That is how we reconnect and reflect more deeply and sustain ourselves and our movement.”

“As a field of inquiry and practice, data sciences do not have an ethical code,” says Hausmann-Stabile, “despite the fact that data and algorithmic processes and computational techniques impact everyday life for all of us.”

Readings for the class, which will be offered again this fall, included Beginning Ethics: An Introduction to Moral Philosophy by Leis Vaughn and Weapons of Math Destruction: How Big Data Increases Inequality and Threatens Democracy by Cathy O’Neil.

Khor worked with students to create one-page graphic narratives based on recipes, ingredients, or memories connected to food that they then joined together to create a zine, using the resources of the campus’s new makerspace.

“Being able to connect with artists like Shing who have a wide span of skills like writing, illustration, and carpentry—and a drive to expand into more niche craft—is special in that these are the same multidisciplinary sorts of interests we have,” says Tori Garity-Fernandez ’22. “A student coming into comparative literature might tend to be indecisive because there is so much they want to do and explore, but a student coming out of comparative literature will be on the path to finding the unique way those interests overlap.” 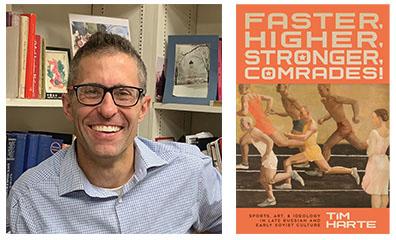 Harte is also the author of Fast Forward: The Aesthetics and Ideology of Speed in Russian Avant-Garde Culture, 1910–1930, published in 2009 by the University of Wisconsin Press. His research interests center on 20th-century Russian literature, film, and culture. His teaching interests include courses on 20th-century Russian literature (Nabokov, Chekhov), avant-garde culture, contemporary Russian culture, silent cinema, Soviet and Eastern European cinema of the 1960s, and, last but not least, the Russian language. 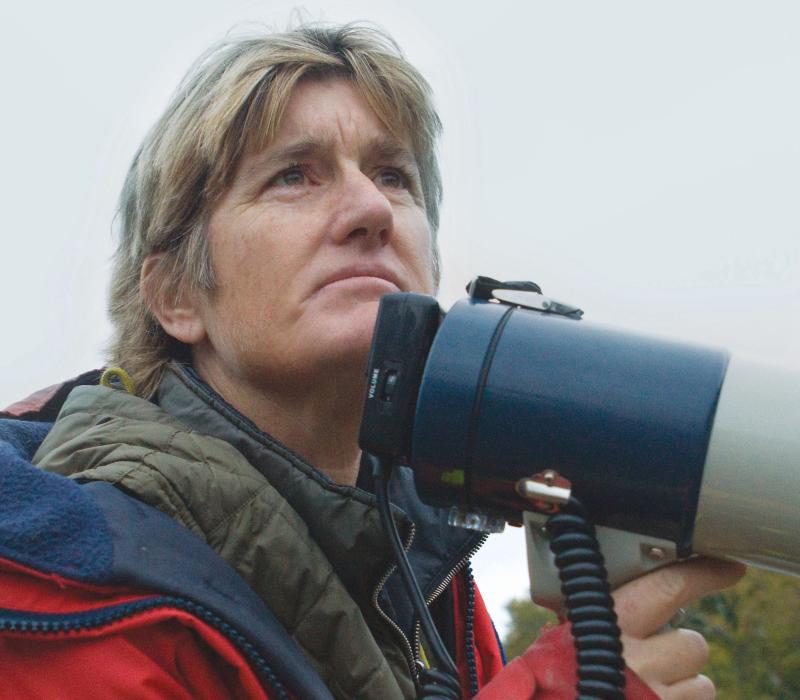 Carol Bower, head coach of rowing at Bryn Mawr College since its inception in the late 1990s, will retire from her duties at the end of the academic year.

“Carol has had a distinguished career as an Olympic athlete and collegiate coach, in which she excelled at the highest level and committed her career to the development of the sport of rowing and supporting and mentoring student-athletes,” said Director of Athletics Kathy Tierney.

The Owls have picked up plenty of big wins and podiums during Bower’s time, coming home with the win in the 2017 Kerr Cup Regatta, second place in the 2017 MARC Championship Varsity Eight Grand Final, and several top three finishes at the Dad Vail Regatta. Bower was named to the U.S. National Rowing Hall of Fame in 1984 and again in 1991.

Bower’s presence at Bryn Mawr will be greatly missed by her athletes and the department. “As a gold medal Olympian herself, Carol was one of my main inspirations to pursue my dream of competing for Team USA,” said Jenny Sichel ’10, a silver medalist at the 2016 Paralympic Games in Rio de Janeiro.

Bryn Mawr Athletics and the College hope to offer alums an opportunity to celebrate Coach Bower’s career in person at our next Homecoming in the fall. 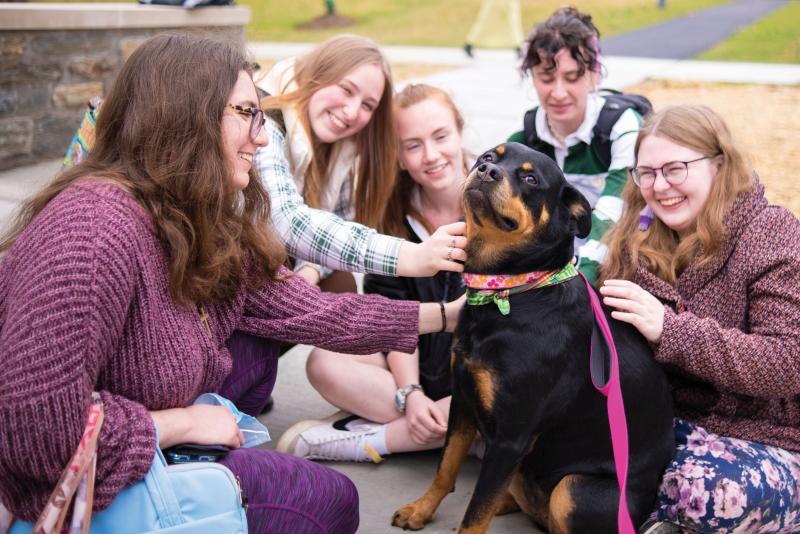 Spring programming at the new Student Life and Wellness Building, known as “the Well,” has included vision boarding, using lavender for sleep wellness, yoga, mindfulness breaks, and—most cuddly of all—Pets on the Patio. Thanks to Pals for Life, a nonprofit dedicated to providing the therapeutic benefit of pets to those in need, half a dozen assorted canines (including this adorable young rottie) and a bunny mingled with students one March afternoon outside the Well, offering the special de-stressing benefits that only come with soft fur, wagging tails, and wet snouts.