Tsuda University: A Story of Resilience

In 1900, just a decade after graduating from Bryn Mawr, Umeko Tsuda, the College’s first Japanese student, opened the doors of a new school in Kodaira, Japan, modeled after her alma mater. Tsuda University’s stated mission was to “cultivate all-round women with high expertise and rich culture through small-group education that values individuality and advanced English education,” and over the course of 120 years, it has become a premier institution of women’s education.

In 1986, nearly 100 years after Tsuda attended Bryn Mawr, I had the opportunity to spend my junior year at Tsuda as part of a program that enabled students and faculty to experience life and academics at the sibling institutions. My contribution to student activities was to introduce the May Pole Dance at the urging of recreation instructor and Tsuda alumna Sachiko Tanaka, who energetically mentored all of the international students on campus. Her enthusiasm and continued mentoring nurtured my desire to return to Japan. After completing a master’s in international relations from UC San Diego, I went to work for AT&T Japan for three memorable years.

On October 13, 2021, Tsuda University hosted a 120th anniversary commemorative symposium entitled “Empowering Women to Make a Difference— Considering the Significance of Women’s Universities in the 21st Century Through the Bond of Tsuda and Bryn Mawr.” In her inspiring video greeting, Bryn Mawr President Kim Cassidy spoke about the historic and close ties between the two colleges, both dedicated to “making a difference for all women.”

I was invited to send a video greeting representing the Bryn Mawr-Tsuda Exchange. In preparing remarks at my San Francisco home, I discovered an important hometown connection involving Umeko Tsuda’s sister Yona Abiko, maverick publisher of the Nichi Bei, the most influential overseas Japanese newspaper of its time. In the article “Two Sisters, Two Stories: Transnational Lives of Ume Tsuda and Yona Abiko,” former Tsuda University President Masako lino wrote about how the two sisters worked to rebuild the university after the 1923 Great Kanto Earthquake destroyed the campus.

From her newspaper’s San Francisco office, Yona organized the Tsuda University Emergency Committee—California, whose members included university women, newspaper publishers, businesspeople, and church leaders. To rebuild the university, the California committee, together with its counterpart committee of supportive women in Philadelphia (possibly some of the same women who had
originally helped Umeko fund Tsuda) ultimately raised $500,000, the equivalent of an astronomical $8 million today.

Without the work of these sisters who rallied funds from American women and their allies, Tsuda University would not have survived to the present day. Like Bryn Mawr, Tsuda University has persisted for over 100 years because of resilient change agents. I am thankful that this trans-Pacific sisterhood of resilience continues to be honored and remembered at Bryn Mawr (through the exhibit Who Built Bryn Mawr?), at Tsuda University, and in my home city of San Francisco. 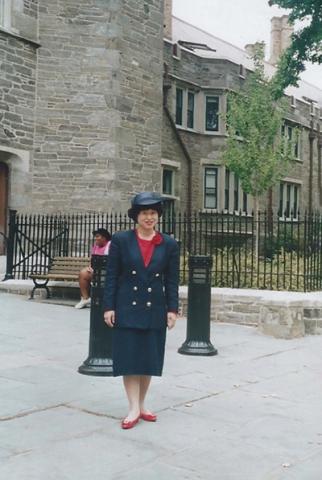