Doesn’t everyone deserve to be loved?

Have you ever questioned your own religion? I mean really questioned it, to the point where you questioned your entire life values? Well, that was me at Bryn Mawr. For context, I grew up going to a Black Christian Baptist church for as long as I can remember. Sunday school, Sunday service, Wednesday Bible study, Thursday choir rehearsal. Repeat. This was my routine every week for years.

Fast forward to 2007. Like many students in college, this was the first time I was out on my own as an adult and truly responsible for every decision I made. While trying to navigate being new to the college environment, I was also navigating my internal cognitive dissonance about my belief in Christianity. I questioned the notions about sexual orientation, that being lesbian was somehow “wrong” in the eyes of God. Why does a person have to be with a person of the opposite sex? Doesn’t everyone deserve to be loved? Does it matter if that love is coming from the same sex? It was not my reality, but it was the reality of so many women I went to school with, was friends with; they deserved to be happy just like anyone else. So, if I couldn’t trust parts of the Bible, what else couldn’t I trust about Christianity?

The course African-American Religious Experience continued to open my mind. Reading about the history of Christianity, including its use to support slavery, was more than a little troubling to my barely 20-year-old self. I found the words of James Cone, James Baldwin, and Kwame Ture enlightening as I grappled with the fact that the book that I studied in church was the same book that was used to enslave my ancestors. I wanted to know more. I had to know more, but some of my politically correct white classmates did not make my process of self-discovery any easier.

Frequent microaggressions piled up in my day-to-day at Bryn Mawr, and every time they did, I wanted to go off. The underlying notion with these microaggressions is that white people can apologize and release themselves of their white guilt. Eventually I got used to what it meant to be “Black” in these contexts, but what about Christianity? Knowing that my religion was taught to Black slaves as the white man’s religion still didn’t sit right with me. How could I keep reading the Bible knowing that countless deaths and lynchings were justified within it?

In college, Christianity to me was about doing what I was “supposed” to do. It was rigid. It was automatic in a way that did not fully connect with me. And I clearly felt some resentment toward the religion that failed me and allowed me to judge others who did not share my same ideologies. But I had to learn more about myself and the religion before I could truly feel connected. Christianity to me now is about my relationship with God and living my life for my God-given purpose. Enriching the lives of others. As an attorney and law school coach who uses my gifts to ensure BIPOC pre-law and law students are the best versions of themselves, I am doing just that. 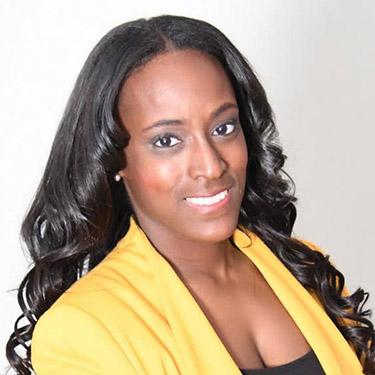 Aigné Goldsby '11 grew up in Reading, Pa., before attending Bryn Mawr. She currently works as a staff attorney for the Connecticut Department of Energy and Environmental Protection. She is also the founder of Black Esquire LLC, where she coaches BIPOC pre-law and law students.