Dounya Ramadan ’22 might never have heard of Bryn Mawr if not for her mom’s co-worker Lizzy Lee ’14. Here the two tell how a road trip to the Main Line set Ramadan on an unexpected path. 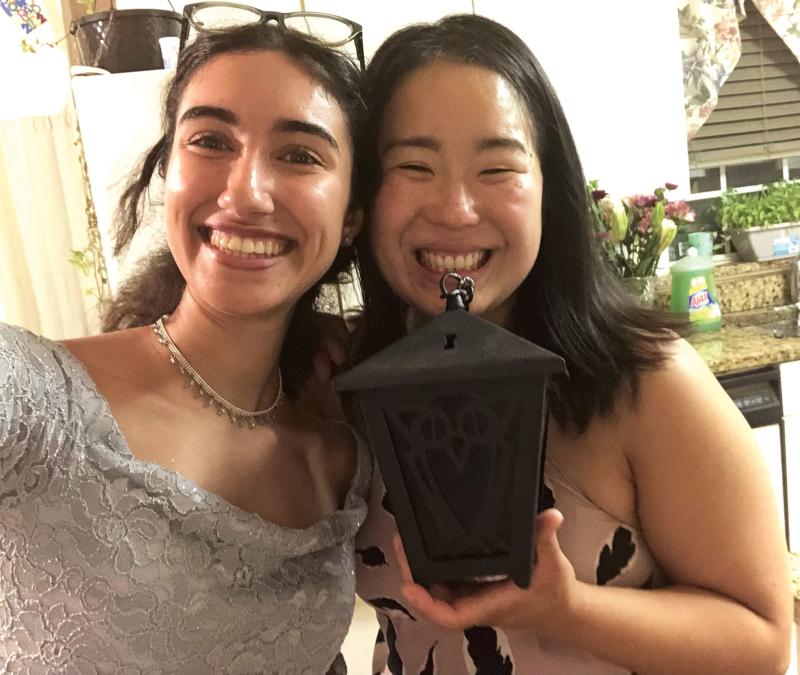 Dounya Ramadan: Lizzy [at right] was my mother’s colleague. My mom worked at the University of Delaware English language Institute and Lizzy was also there. One day my mom was like, “You should meet Lizzy.”

Lizzy Lee: Dounya’s mom and I ran a women’s life support group for our ESL students where we were trying to help them feel a sense of community and get the support and resources they needed. That felt very aligned to Bryn Mawr values. Dounya’s mom would bring her to a lot of our events and parties and stuff.

Dounya: That’s it! And when I met Lizzie we just clicked. I love Lizzy and she’s really involved with our whole family.

Before I knew it, it was my senior year of high school, and I was really active in the social justice sphere that year in particular. Lizzy said, “You know what, Dounya, I want you to see a college. I feel like it’s you.” I didn’t even know where this college was or what it was. I had already applied to the colleges on my list.

We took a road trip from Delaware and when we got there, I was just taken back. It was such a beautiful campus. It looked like a castle to me. It looked like Hogwarts. That was something that definitely pulled me in from the start. Lizzy told me all about her experiences there and I applied right afterwards. I was like, “I have to apply!”

Lizzy: When I think of Dounya in high school, I was just amazed, because she was organizing rallies in Panera and she spoke at the Delaware Women’s March in 2017. At such a young age, she was already a trailblazer and community leader. And that reminded me of a lot of the people I met and friendships I made at Bryn Mawr and the kind of values that I went there for and strengthened while I was there.

I think she would’ve been fine at a large state school, but I also felt like who she was would really thrive in a smaller environment that pushed you to think critically about various social issues and be a leader. I think throughout the whole campus tour I was just trying to show her the benefits of going to a liberal arts school that’s smaller and more community focused.

Dounya: Everyone I spoke to thought it would be a great fit for me. People apparently thought of me as a leader, a social activist, a change maker in my community. And they all thought it would be a great place for me to expand and grow as a leader and be with like-minded people who also have that fiery sense of making change. I was the most surprised truthfully because I never thought I’d be going to a historical women’s college. That blew my mind completely. As an intersectional feminist, I actually wasn’t aware of the historical women’s colleges that existed in the U.S., and my mom didn’t go to undergrad here, so she wouldn’t have known about a place like Bryn Mawr.