By day, a research manager at Duke University’s Abdul Latif Jameel Poverty Action Lab, Lauren Faber ’07 is a standup comic by night. Asked in the first grade what she wanted to be when she grew up, Faber said: A standup comic.

Today, Faber cracks wise on some tough topics—gender and sexuality, justice, even poverty in Africa. “The things I care about professionally,” she explains, “topics that are sensitive. But I do it in a way that’s conscious of history, power dynamics, and people who have been historically victimized. A lot of comics—who often happen to be white men—complain about being forced to be PC. But I think they’re punching down. I think I manage not to do that.”

Named Carolina’s Funniest Comic at the 2016 North Carolina Comedy Arts Festival, Faber was on campus in November for a night of standup. Playing to an enthusiastic audience, she riffed on her misadventures as a lesbian globetrotter trying to get a date—and save the world.

“I get called sir all the time. I feel sorry for the people, they say I’m so so sorry. I know, I know. I did this on purpose. That’s exactly what I asked for at the barber’s.”

Faber spent her childhood in thrall to standup; she’d sneak into the basement to watch Rosie O’Donnell’s Stand-Up Spotlight and Ellen DeGeneres on the Tonight Show, and answered the classic first-grade question, What do you want to be when you grow up? with that prescient, “A standup comic.”

But she’s far more than just a jokester. “I want to do things that are more concretely helping people professionally,” she says. “I think standup will be a hobby.”

Like many comics, Faber takes things seriously. Before coming to Bryn Mawr, she took a gap year: “Going to college seemed so automatic and perfunctory that I wanted to have an idea of what I wanted to do before I showed up.”

"They say comedy is just tragedy plus time."

She explains, “I worked at Starbucks. I also worked for a lawyer who did a lot of pro bono work for battered women. I volunteered for Mother Teresa’s nuns at the Mission of Hope AIDS Hospice in Baltimore. And I took fencing lessons and jujitsu lessons, and I read a lot of books, and I clarified what I wanted to study and do.”

An economics and political science double major, Faber is now thinking of going back to school for a Ph.D. in psychology. “I didn’t major in psychology at Bryn Mawr because I enjoyed it too much,” she says. “I thought I should be doing something that I would only do under a rigorous curriculum where someone was teaching me something I wouldn’t learn on my own, and I could pursue psychology for fun later.”

"It’s going to be fine. As long as you never leave Bryn Mawr."

Why Bryn Mawr? Faber contemplated an Ivy League school in New York City, but but says, “when I visited, everyone wore a lot of black and smoked and was just dying to get off campus. Bryn Mawr had all the intellectual rigor, but people wanted to be on campus and wanted to be part of the community.”

Plus, she explains, when she saw the Princeton Review ranking of Bryn Mawr as No. 1 in the amount of time students devoted to studying per day, she knew, “these are my people.” 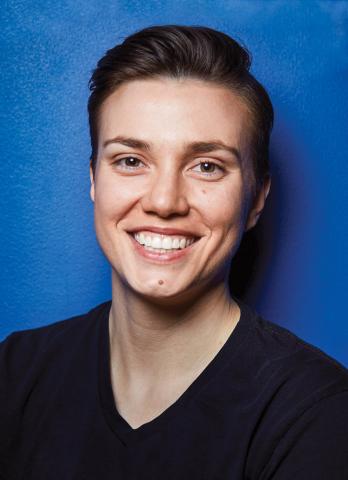