Allaina Propst '12 opened a brewery and restaurant in her hometown, Honesdale, Pa.

A native of Honesdale, Pennsylvania, Allaina Propst ’12 majored in economics at Bryn Mawr and did a brief stint on Wall Street before returning to her hometown and eventually opening her own brewery/restaurant/bar. Propst has also become involved in various civic initiatives, including solar power, in her county.

Hometown Honesdale: I was born and raised in Honesdale, Pennsylvania, a wonderful little town a couple hours outside of Philly that’s the birthplace of the American railroad. I was an only child who grew up in the woods on family land around my cousins, grandpa’s garden, and quiet landscape. My dad’s father was a surgeon here, and my mother’s parents were local, so we have really deep roots in the area.

“Why not?”: When I graduated from Bryn Mawr, I intended to do investing on Wall Street, and I did do that for a while but felt unclear about my goal. One day, back in Honesdale, I ran into a friend from high school who was looking for help running the farmer’s market for the summer, and I thought, “Why not?” I never intended to live in the town I was raised in; I just fell into it. My father had died, and I couldn’t see leaving my mother at that point.

I started to walk around town, looking at the architecture, ideas popping into my head: “What does the town need?” At the time, it was places to stay. And what do you find in a hotel? A bar. I began looking at buildings and found one that needed a lot of work but was absolutely gorgeous, with original molding, hardware, the old wavy glass, a tin ceiling, and a set of hand-painted French doors. I was 23, had a small amount of savings, and the buildings in town weren’t too expensive because they needed work. It was tough figuring out all the permits and cleaning out hundreds of years of filth, but it worked out thanks to hard
work and perseverance, and just not taking no for an answer.

Growlers to go: We opened our brewery first. I’d made some ciders because there were old apple trees on our land, and I’d brewed a couple of beers. I was approached by a brewer whose wife didn’t want him using their garage anymore. Ben, my fiancé, thought we could do something more than just beer in a tasting room. He’s a chef and moved to the area to work on a farm but was quickly scooped up by a local restaurant and then helped us start this place. In January 2017, we started selling growlers of beer to go. I just had four kegs, and we’d pour the beer until they were empty. We did that for a few months while our dining room was being finished and then opened that in the summer.

Local, seasonal, and whimsical: Our mission at Here & Now Brewing Company is to create world-class beer and food for the people of Honesdale and whoever happens to be coming through. The tagline local, seasonal, and whimsical drives everything we do. We try to stay community focused because if that’s not there, then you don’t really have a business. Opening a hotel is still the vision. We’ve put in a lot of hard work and creativity, and I’m thankful every day that people are still coming!

Know someone we should profile? Email us at alumnaebulletin @brynmawr.edu 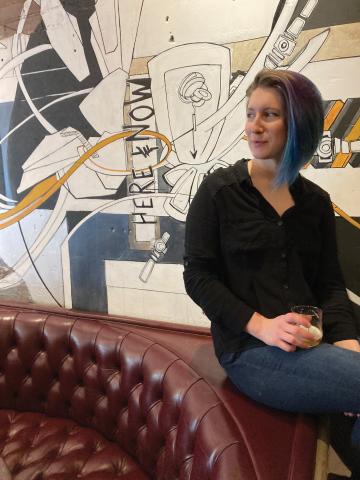