A journey that began in the streets of Managua leads to a premiere at Cannes.

On a family visit to Nicaragua in 2015, I interviewed many women filmmakers. It was a passion project. I had no permits, no budget, no crew.

I simply borrowed my uncle’s van, loaded it up with my video equipment, and solicited the help of my untrained 15-year-old cousin. We drove around the capital city of Managua, tracking down some of the country’s most prolific filmmakers from the last 40 years. I reached out to local journalist-historian Karly Gaitán Morales, who had just published the first-ever comprehensive book on the history of Nicaraguan cinema.

The result was Even with Their Nails, a 30-minute documentary that celebrates women filmmakers in Nicaragua. The title originates from the Spanish idiom hasta con las uñas, which means pulling oneself up by the bootstraps.

The title also reflects how filmmakers persist despite the many struggles in Nicaragua’s history. Film financing ceased after INCINE (1979–1990), the only government-funded production house, closed its doors. Since then, a sustainable national cinema has not been feasible given the urgent economic needs of the country. A national film industry has remained a dream in the collective consciousness, and filmmakers today, the majority of whom are women, have embraced a learn-by-doing philosophy that makes them industrious in the absence of an industry infrastructure.

In Central America, the increasing number of women working behind the camera is a significant trend that some attribute to the reconfiguration of gender norms that occurred after the Sandinista revolution. But access to digital equipment has also opened a space for women to acquire more leadership positions during production. Without a government-regulated film industry, there has been an ideological shift in the practice of filmmaking. This shift is reflected in the increase of women-centric narratives, socio-ethical perspectives, and concerns relevant to indigenous and youth communities.

Given this context, Gaitán Morales’ book, A la conquista de un sueño: Historia del cine en Nicaragua, is a monumental endeavor. She spent 10 years collecting films, organizing unfiled documents, and tracking down people to interview. Even with Their Nails extends from her unprecedented research and is the first retrospective video to document the collective filmography of women filmmakers in Nicaragua. The film presents the work of Maria José Alvarez, Martha Clarissa Hernández, Kathy Sevilla, Rossana Lacayo, Belkis Ramírez, Brenda Martinez, and Florence Jaugey—women who paved the way for the new vanguard of filmmakers like Laura Baumeister, Rebeca Arcia, and Heydi Salazar.

Although I’ve had my share of red carpet moments at international festivals, what should be celebrated and recognized are the achievements, resilience, and courage of Nicaraguan filmmakers.

Nicaraguan-born filmmaker Tania Romero ’05 lives in Texas, where she teaches media production. A psychology major and film studies minor, she has an M.A. in media studies from the University of Texas, Austin. 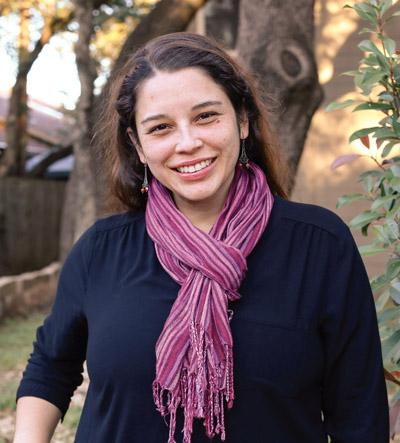