Leading the Fight Against Islamophobia

Who are Muslims’ allies? Everyone needs to be, says the author.

When my daughter was seven years old, she wrote a 10-page book, by hand, about Ramadan for a school project, complete with photos and pronunciations of Arabic words.

Three years later, she revealed to me that after she had finished reading it to her classmates, one approached her privately and asked: “Are your parents bad? Do they do bad things?” My heart broke for my innocent little girl, exposed to stereotyping at an age in which she had no idea how to process it. So, in an effort to educate others, I started sharing information via social media about Islam and what it means to me as a practicing Muslim.

One year after my daughter’s revelation, the U.S. presidential campaign was in full swing. In December 2015, after hearing candidate after candidate malign my religion for weeks, I knew I had to do more to defend Islam and its adherents. I was terrified: If our leaders were openly perpetuating stereotypes, the average person would have license to do so as well.

I decided to write a public Facebook post. In it, I offered myself as a resource to speak about Islam and Muslims with the goal of breaking down barriers and building bridges between people. The post was shared 55 times, the closest I’d ever come to “going viral.”

Thirty-six hours later, a local TV news reporter called; she had heard about the post from a mutual friend and wanted to interview me about my efforts to “demystify Islam.” To say I was caught off-guard is an understatement. However, I knew that the story would enable me to reach a wider audience, so I agreed.

For the past two years, I have had the pleasure of speaking to a variety of audiences in different forums: churches and libraries; meetings of insurance agents and union representatives; elementary schools, middle schools, high schools, and colleges at the invitation of administrators, teachers, professors, and leaders of student groups. I have been interviewed for a podcast, a public-access TV show, and various newspaper articles; spoken at rallies; answered questions at “Meet a Muslim” tables at community events; and participated in interfaith prayer services.

I left every one of these events with new friends, now armed with facts about Islam and willing to be more vocal about defending Muslims. At one talk, a 10-year-old girl asked, “Who are Muslims’ allies?” I said, “You are.” According to her mother, she took my words to heart and made a conscious decision to stand up for others if she witnessed someone being mistreated.

When I embarked on this journey as a community educator, I merely wanted to open minds and hearts. I came to realize that I had more to learn about my religion, and the more I learned, the more my love for my faith grew. Until recently, I only wore the hijab at mosques and during speaking engagements. However, I decided that I wanted everyone to identify me as Muslim at first glance, so I now proudly wear it full-time.

People ask how I have time for this work in addition to my job, my family, and a volunteer project that I created. The truth is that I often wish there were more than 24 hours in a day. However, I rarely pass up invitations to speak, not only because I believe that community education efforts are critically important in this fractured world but also because I genuinely love making personal connections with other human beings and sharing all we have in common.

A research scientist at the Research Foundation of the State University of New York and founder of Jazzy Sun Birthdays (a volunteer project that hosts personalized birthday parties for homeless children), Fazana Saleem-Ismail ’94 is exploring ways to make her efforts to build bridges among communities her life’s work. Stay tuned. 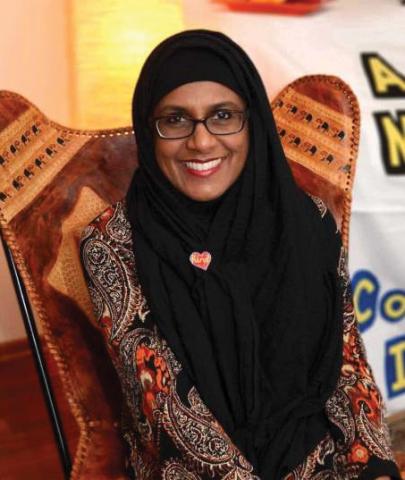