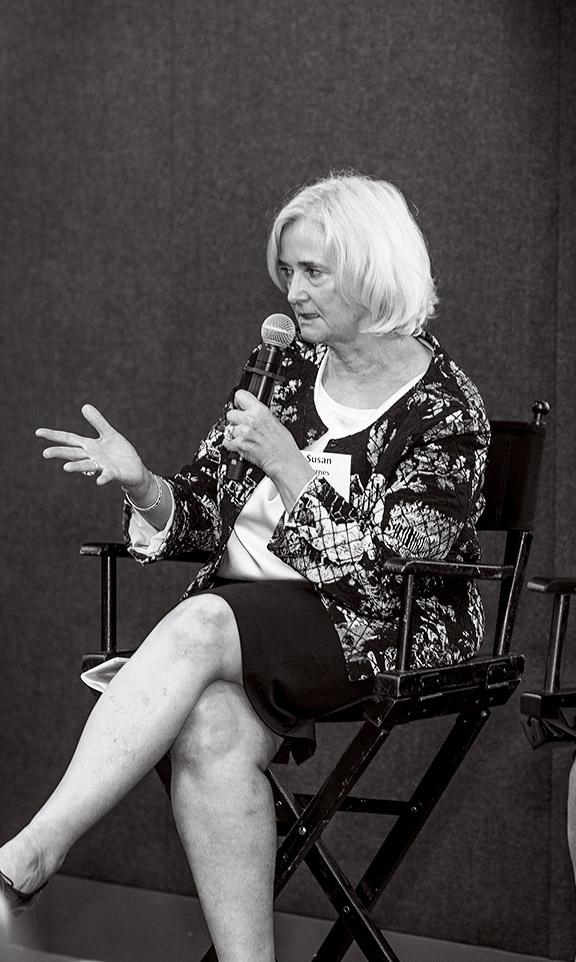 People from all over tell me, “We can’t find any women software engineers.” At a dinner this summer, someone said to me, “Oh, we’re so proud at Stanford that 35 percent of our CS majors are women now.” And I said, “Well, at Bryn Mawr it’s 100 percent.” So when recruiters talk about the frustration of not being able to find women, I say, “Go where the women are.” 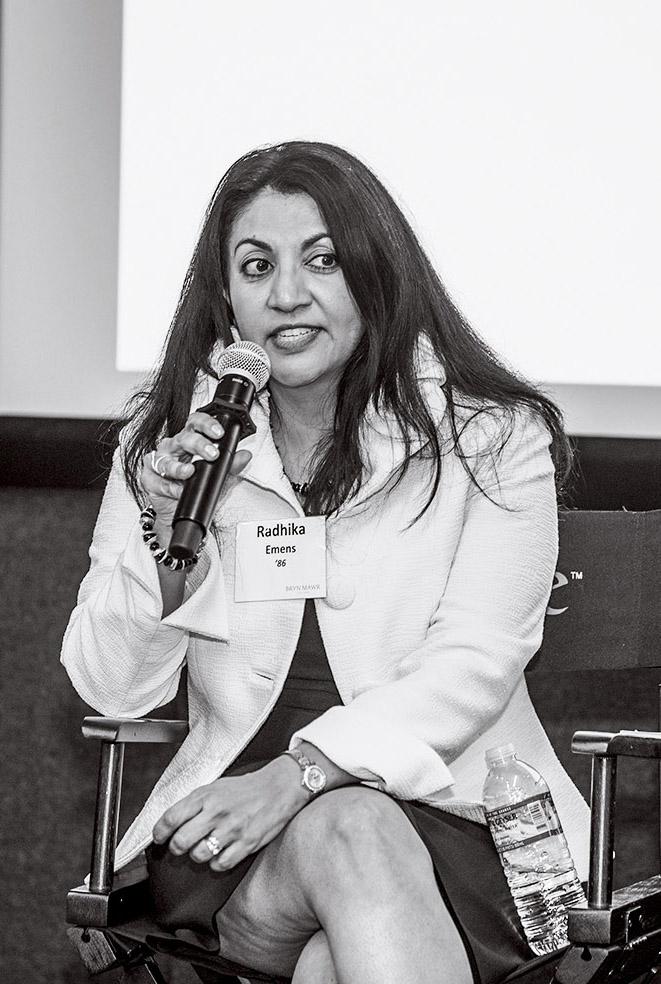 At every point in every group that we work with in almost every ecosystem, we see either one among a sea of men or none. Women entrepreneurs face real challenges that I’d like to see change on both the entrepreneurship and the investment side. I’m in conversation with numerous investors in the Valley now: “We need to incentivize funds— individuals, organizations—to focus on women founders. Because when 30 percent of businesses are owned by women and yet 7 percent of venture capital is being given to women founders, that’s a dismal figure. That’s got to change.”

The best advice that I have for dealing with a large group of men, or even with smaller teams, is to just demonstrate the type of behavior that you would want them to model. Coaching, being patient, but addressing issues quickly—it’s important to deal with people diplomatically.

A good example is trying to bridge the gap that can exist in a very diverse team made up of project managers and designers. On one project I worked on, the type of feedback we got at times was rooted in “I feel” and “I believe” statements. But I don’t care about that. I want data. So in a non-antagonistic way, I said, “This is how we’d love for you to deliver feedback to us. And this is how we should always be delivering feedback to each other.” And after we covered a few other topics, the lead of that group—someone I partner with—said, “The feedback message is the most important thing that all of you should walk out of here knowing.” 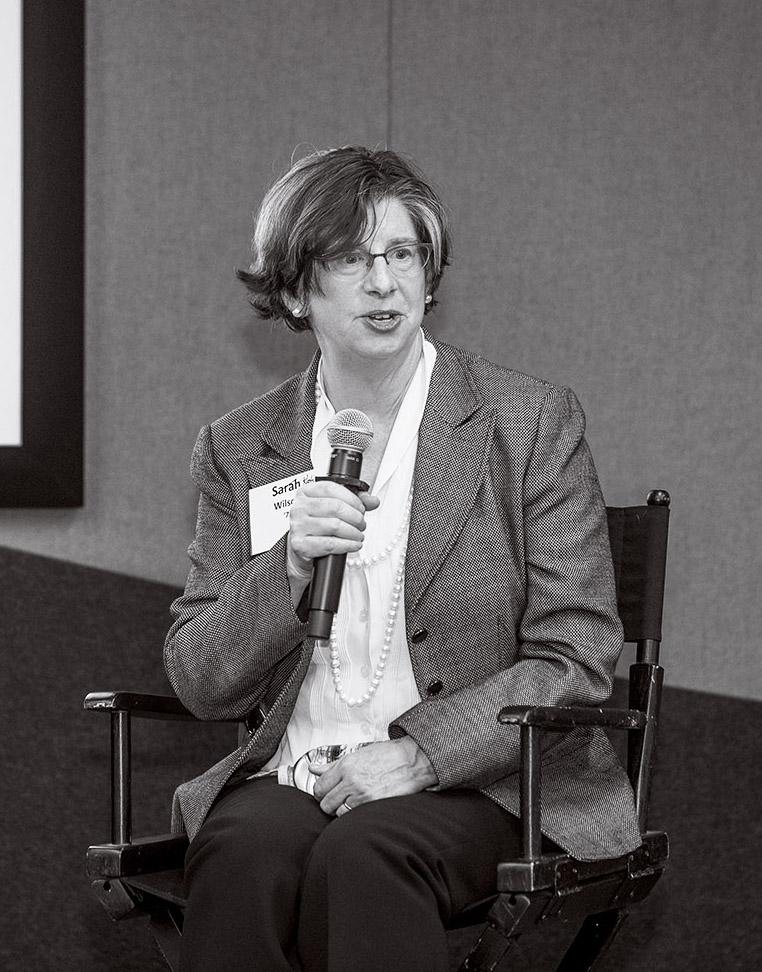 But, yes, my area is still about 12 percent women. At conferences, I’m often the only woman in the room, and I’m still sometimes mistaken for administrative staff rather than an engineer.

In my area, where we’re hiring primarily Ph.D.s in electrical engineering, our pool is probably 10 percent women—pretty much the same as it was when I got my Ph.D. 20 years ago. So I don’t see much improvement on that front. But I did make an interesting observation. In both Singapore and Shanghai, my teams are close to 50 percent women. I always thought there’d be a fascinating sociology Ph.D. in understanding that difference.

What advice would you give to women looking to make that mid-tier level jump up?

Jessica Schwartz: First, present your case at every step of the way. Don’t just showcasing your skill sets. Look at the next step and say, “What do I have now that might catapult me into that next category?” As you’re moving up, build the case for yourself and learn the art of negotiation by saying, “Look, here’s my achievement.” Make the business case that you have what it takes.

And be unafraid to take risks. If you’re only take on safe projects, you will never have the opportunity to showcase what you have that’s different from everyone else. And by the way, risk can come with failure, and being unafraid of failure helps build the path towards leadership. People who take risks make it into leadership circles.

Susan Barnes: Sometimes you have to be willing to step down to step up. At one point, I wanted a job in General Accounting at Apple, and they said, “Well, you’re not a cost accountant.” I said, “Okay, then let me be one.” So when you recognize where you’re missing the skills, ask the organization to let you be on that learning curve. That position may not be at the manager or director level, but it could be at the level just below.

Don’t always play your specific role. For example, someone in manufacturing had an issue I had encountered, and I worked with them. Guess what? They made me head of manufacturing. Be collaborative, show some natural leadership, and help solve problems for other people by listening and stepping into their shoes.

Radhika Iyengar-Emens: Choose wisely. Company culture is important. If a company has women in leadership positions, women coming up are more likely to be in a strong situation.

Sarah Kate Wilson: There’s a danger in false modesty. A lot of us say, “Oh, not me.” Well, how are they going to know unless you tell them? The idea that they’re going to promote you because somehow they recognize your wonderfulness without your simply stating your case is a false modesty.

Radhika Iyengar-Emens: Build a brand. When you build a credible brand — write articles, get published, do something that is larger than your little role – those contributions stand out. The power of a brand can help you move up through the ranks. Every company likes people who are visible, who are out there, who have a strong brand. And it helps you along the way as well.

Some women in the workplace get coaching to help them navigate a male environment. Is that a good way to go?

Jessica Schwartz: At Google, we have an all-women’s program, essentially a two-day training where we talk through and deal with the challenges women face in the workplace. It’s very therapeutic, but the real value of the program comes afterwards. That feeling of community is enormously valuable. We at Bryn Mawr understand the value of that support. I’ve never done one-on-one coaching, but when you’re feeling alone, having a group to go to for two days, and then permanently afterwards, is magical.

Susan Barnes: Coaching is a rare talent and I’ve seen people ruin their careers over personal coaches. Growing up in the early days of Apple, my best coaches were my peers, my women peers, because they understood the culture. A personal coach can be much like your husband or your psychiatrist, where you tell your version of reality and they feed that version back to you. In Bryn Mawr’s world, you reach out to your friends, your peers. That works in the workplace does as well.

I have one funny story about coaching. I was working with my husband at one point. We both had the same boss and I came home very, very upset about a situation at work and he was saying, “Well, this is how you should have handled this.” And I said, “No, I don’t want you to play the peer role. I want you to play the husband.”