The Ones We Have Been Waiting For

Angela Davis addresses the Class of 2018.

Activist icon Angela Davis has dedicated her life to social justice. In May, she inspired the graduating Class of 2018 with her remarks, excerpted here.

Studies indicate that most people not only immediately forget the content of their graduation speech, but they don’t even remember who the speaker was!

So despite the fact that what I say and who I am may be subject to the fate of all ephemera, I do want to tell you that the pessimism with which I initially approached the task of writing this address at this moment began to lift when I imagine the splendid heterogeneity of the Bryn Mawr Class of 2018—your many faces and the multiple forms of consciousness they reflect, especially at a time when women are rising up in the country and indeed throughout the world.

As always, I use the category "women" in its most capacious sense. Embracing women of all racial, ethnic, national, and class backgrounds, but also in a way that questions the ideological capacity of the gender binary to exile beyond its borders women whose gender identity may not correspond to normative assumptions regarding the primacy of biology.

Your generation is absolutely remarkable.... Despite the backwards movement, putatively toward greatness, of our political world, you and those of your generation represent a depth of knowledge that we have needed for a very long time. You now know how to contest hierarchical notions of race and gender as they are structurally and discursively produced and reproduced. What is extraordinary is that young people—your generational cohort—have accomplished so much in a relatively short period of time—from beginning to undo the gender binary, to challenging racist police violence, to finally standing up to the NRA, and saying a definitive No to sexual harassment and gender violence.

You have made sure that after decades of feminist resistance, after centuries of struggle for women’s rights, the message has finally been taken seriously that our societies need to be purged of sexual harassment and gender violence. You tell us that, yes, it is possible to produce temporal ruptures. Assaults on women, whether they be verbal or physical, are not okay. Those who continue to think they can behave as they have in the past must be rendered accountable. Time is up, time is up.

We cannot simply call for diversity and expect the institution to function exactly as it did before the addition of diversity.... Diversity accomplishes little unless it is accompanied by restructuring, transformation—indeed, radical transformation—with the goal of moving toward justice.

These days, as women rise up, I feel compelled to reach back into history, the history of the South African struggle, and to remember the proclamation that Lilian Ngoyi, Albertina Sisulu, Helen Joseph, and thousands of others made during the August 1956 demonstration in Pretoria. The demonstration was against the extension of the pass laws to women. They said, “Now that you have touched the women, you have struck a rock, you have dislodged a boulder, and you will be crushed.”

We now know that to fail to address the modes of subjugation that have kept half the planet’s population in chains, can only exacerbate and extend racism, militarism, capitalist exploitation. There can be no racial justice, there will be no peace, there can be no economic justice, unless we forthrightly insist on gender and sexual justice.

I end by reminding you, the Bryn Mawr Class of 2018, that you know how to say, as June Jordan, so eloquently put it in her “Poem for South African Women,” “We are the ones we have been waiting for.” 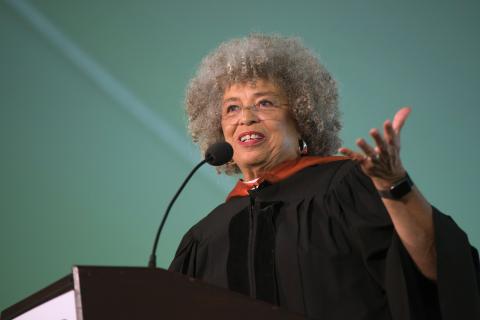