With its long history of educating scientists, it’s only natural that Bryn Mawr hosts the country’s first STEM Posse.

When Carol Bowe ’17 arrived on the  Bryn Mawr campus as the first person in her family ever to leave home for college, she faced more than one challenge. There were the everyday pressures of her demanding studies in physics, but often she simply missed the familiar touchstones of her native Boston—her family, her friends who stayed behind, even her favorite restaurants. It was at moments like these that Bowe was glad she had people who knew exactly what she was going through.

They were, literally, her posse—nine other classmates who comprised Bryn Mawr’s very first STEM Posse, chosen together as public high school seniors in Greater Boston to bond through college and help each other succeed as women from diverse backgrounds breaking through barriers in science and technology.

Bowe has loved attending college with “people who know Boston—you all have the same city as home. When you say I miss that place downtown, some food place, they all know what you’re talking about.”

In 2012, when Bryn Mawr announced it would be hosting the first Posse created specifically to support women in the fields of science, technology, engineering, and math, the College already had a strong track record with the New York–based Posse Foundation. As one of the leading schools working with the innovative scholarship-and-support program, Bryn Mawr has educated roughly 170 Mawrters since the program arrived on campus in 2005.

Created in 1989 in New York City, the Posse Foundation now operates in 10 metro areas from coast to coast; founder Deborah Bial envisioned the program as a way for students from urban environments—who often were overcome with feelings of isolation when leaving home for a college campus—to have a support network similar to their friends and family back home.

Bryn Mawr currently has four STEM Posses—one in each class, for a total of roughly 40 students—in addition to four other Posses whose students major in a variety of subjects. The STEM Posse initiative aims to kill the proverbial two birds with one stone: advancing the program’s original goal of helping youth from nontraditional backgrounds survive the pressures of an elite college, while also funneling more high-achieving women into science or high-tech careers.

“Without the Posse Foundation, most likely these students would never have come to Bryn Mawr,” says Biology Professor Peter Brodfuehrer, who ran the STEM Posse program at Bryn Mawr for the first three years of the program and coordinated its summer program. “It’s a wonderful opportunity for them.”

STEM Posse participants meet one-on-one with their mentor every two weeks and regularly as a group, but they say the program’s greatest value is the bond they form with each other, and the advice and support they get from hometown peers in the same boat as they navigate the sometimes-difficult currents of a science or math education. 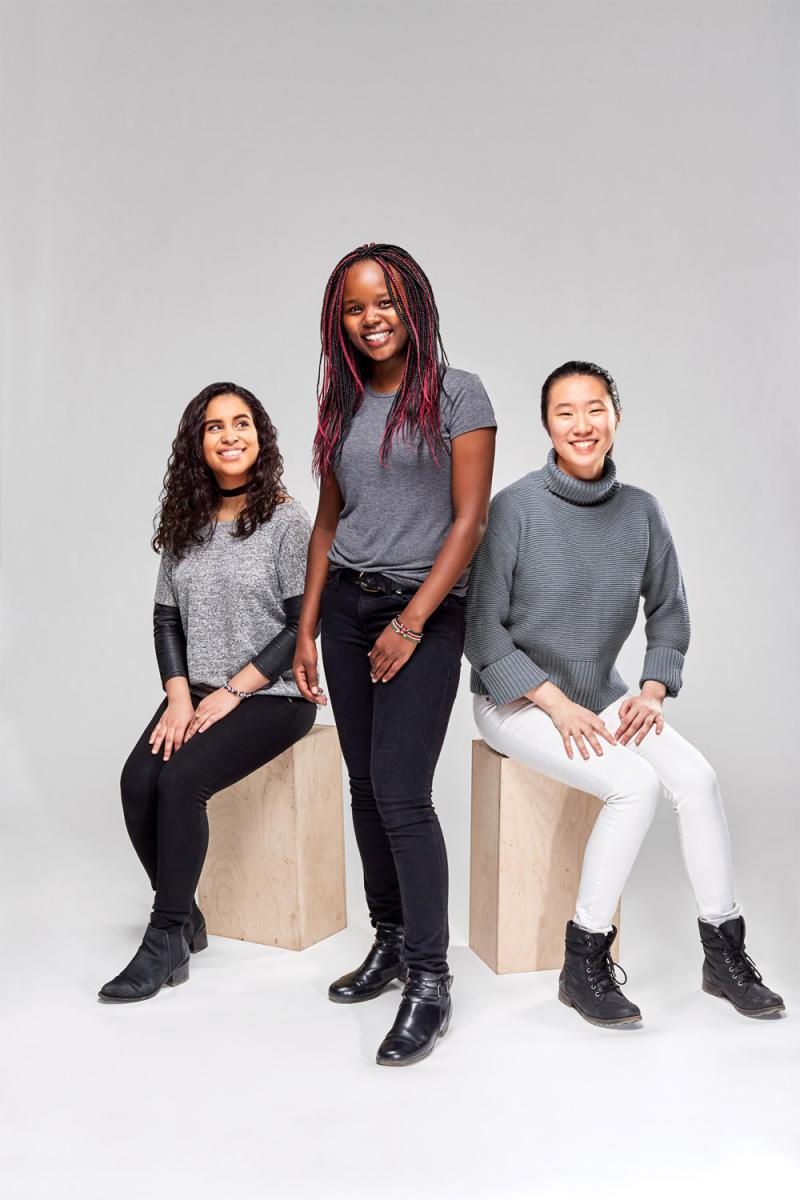 “The transition from high school to college, especially at Bryn Mawr, where academics are such a process has been difficult,” said Paola Salas ’19, a sophomore from Lynn, Massachusetts, and a member of the third STEM Posse. “Sometimes it’s easy to think you’re not meant to be there and not smart enough, but having a group of girls who come from similar places and similar backgrounds and interests and having a mentor who tells you that everything is amazing and you’re going to accomplish whatever you want—it’s a great support system.”

The expansion of the Posse program into a dedicated STEM group four years ago aimed to address the additional layer of challenges for women who not only hailed from diverse backgrounds but also were entering the male-dominated science and tech fields.

“We talked a lot about it before we came in, in the pre-training,” Bowe recalls, “We talked about imposter syndrome, where you feel like you don’t belong there.”

Bowe says those conversations and the nurturing environment at Bryn Mawr have definitely helped, particularly in science classes that include men from Haverford College.

Mercedes Aponte ’18, a 20-year-old junior from Brockton, Massachusetts, in the second STEM Posse, says the group and the generally supportive community at Bryn Mawr have helped her as her initial interest in physics and biomedical engineering took an unexpected turn toward coastal geology and the impacts of climate change. “It’s definitely a supportive environment,” says Aponte, who adds that the Posse Foundation’s strong outside relationships with internship programs also help with her career goals.

Bowe says Posse participants were told the program was created after teachers in New York City sent their students off to elite colleges, only to see them back home months later. One supposedly  said to her teacher, “I never would have dropped out if I had my posse with me.”
“The legend behind the whole thing has to do with the fact that you have talented people who go to these schools where they feel very much out of place,” says Associate Professor of Geology Pedro J. Marenco, who has mentored students in the STEM Posse for four years and is now becoming director of Bryn Mawr’s program.

The process begins back home in Boston, where Posse Foundation officials interview top candidates in area public high schools. The group of 10 is announced at an awards ceremony midway through their senior year and almost immediately launches into an intensive eight-month pre-collegiate training program, where Posse members bond with one another, sharpen their academic skills through activities such as writing workshops, and talk about some of the social hurdles they’ll soon be facing.

The STEM Posse members continue to meet frequently in their first two years on the Bryn Mawr campus, coming together as a group every two weeks and also meeting regularly with a faculty member such as Marenco.

“We have meetings where our mentor would have us talk about a class where we’re having issues or struggling to keep up with the work, then we would give each other advice as a posse,” Bowe explains. “They said, ‘Here’s something you can try—have you tried the writing center and having other people to support you through that?’”

The Posse Foundation looks closely for leadership skills as it selects candidates, and Marenco has seen that make a difference at Bryn Mawr. “They know that they can contribute to campus,” he says, citing the example of two Posse students he’s mentoring who recently became dorm leaders to support incoming freshmen.

“And one of our scholars is a biology major—she’s super busy—but took on the task of directing the theater production last year, which was a time-intensive commitment considering her very vigorous major, and that was very difficult for her,” Marenco says.

Salas, whose older sister attended Bryn Mawr through the traditional Posse program and graduated in 2013, has worked to craft her own independent major, called Medicine, Health, and Society that looks at social implications of health and health justice. Back home, the Posse Foundation helped set her up with a summer internship at Boston Children’s Hospital to further explore  her interests.

As Bowe looks forward to graduation and becoming a high school physics teacher, she notes that a couple of Posse members have changed their majors to non-STEM subjects and that she and many of the others now find their best friends on campus are often students from outside the program. Yet it’s still important that she knows the other STEM Posse members are there when she needs them.

“Even the people who aren’t my best friends in my STEM Posse,  they still act as a support system for me; if I needed them I know they would be there,” Bowe said. “The idea is not that you’ll all be best friends; the idea is that you’ll help people graduate.”

As students and alumnae, Posse students do Bryn Mawr proud. On campus, they excel as Mellon Mays fellows, as winners of McPherson and Davis Projects for Peace awards, and as campus leaders. And post-Bryn Mawr, they pursue Ph.D.s., launch successful careers, and give back. Yinnette Sano ’05, Augusta Irele ’10, and Jomaira Salas Pujols ’13 have worked for the Posse Foundation, while Pujols and Jennifer Rusk ’05 volunteer for Bryn Mawr—on the Board and the Defy Expectation Steering Committee, respectively.