We Will Not Settle

An Interview with Aaliyah Joseph '22.

Jacqueline Handy: Thank you so much for taking the time, Aaliyah. You have been a pivotal voice in the movements on campus towards a more equitable college, and we thought that alums would love to hear about your experience thus far. Tell me about yourself.

JH: That was me, a double-major in psychology and performing arts with an education minor; I never wanted to be one thing. What are some of the projects that you’re working on?

AJ: I’m really proud of my work with the Perry House project. This is an oral history initiative highlighting Black and Latinx experiences both in Perry House and on campus in general. Secondly, I, along with a small group of collaborators, have created the Black Student Liberatory Coalition, a group of Black students who will collaborate with other groups of students on campus to continue to hold the administration accountable for the continued negligence of its commitment to serve ‘all’ “students to the highest standard of excellence.”

JH: That’s exactly what alums want to hear about. We’ve heard that students went on strike, but we don’t know the inner workings. What does it feel like on campus?

AJ: The community feels awkward. We had BIPOC and white students physically in space with us, and those moments were encouraging, but the internet has been a tool for trolling and hate; it feels like we’re constantly under siege by white people who think equity is a threat. One of our coalition members posted about one of the anti-racist policies that got denied by the College and had outwardly alt-right people trolling him and his posts. There’s inside and outside the bubble. Inside, BIPOC students have this underlying fear of just not feeling welcomed, and it’s not just because it’s a white space, but because there are white students who are actively racist and don’t want to come to terms with that.

JH: How has the pandemic played a role?

AJ: It’s tough; like, we occasionally see our friends that we can social distance with, but other than that, it’s mostly to and from the dining hall. That isolation is going to be a barrier post-strike because the tensions have escalated. In our conversations now, we’re really talking about privacy and safety, in more ways than one.

But the pandemic is just one factor. This has been bubbling up from the strike in 1976 to the strike in 2018. Black students have been asking for the same things, and we are ready to actualize those things. This is the culmination of all of the social justice work that alums and faculty and staff have done in the past. We are not just organizing on campus; we are in community with other colleges on the East Coast and beyond to make lasting change on the whole of higher education.

JH: What are some successes that the coalition has had thus far?

AJ: Thus far, we have established annual funding of over $100,000 for the Enid Cook Center to cover the salary of a full-time director and student coordinator. The College agreed to the implementation of a system whereby Bryn Mawr provides $90,000 of funding to international students to cover their scholarship taxes. The removal of the M. Carey Thomas bust and portrait by Jan. 29, 2021. A revision to the College’s financial aid policy will be implemented by the 2022–2023 school year to ensure that paid fellowships no longer replace grants and compromise financial aid, to name a few. This is just the beginning. To be honest, I was disappointed in the amount of negotiating that we had to do with the College; these demands aren’t new, and the amount of compromises we had to make is concerning.

JH: How can we help? This is going to be read by alums who will want to take action.

AJ: I would just say continue to engage with current students so that we can establish a trusting, responsive, and flexible community on campus and off the campus. Far too many students graduate from Bryn Mawr and feel isolated, unwanted, and unloved. I believe alums are in the best situation to support current students and recent alums through these negative feelings because they themselves have experienced them! There’s a lot of potential for our coalition to do the healing and collecting we need and deserve.

JH: My last question: I really want to make sure your voice is at the center. What’s one thing that needs to be included in this piece?

AJ: We will not settle! 176 days is the longest strike on any college campus; we are ready to do what we need to do to make change. Disturb the order. Demand action. 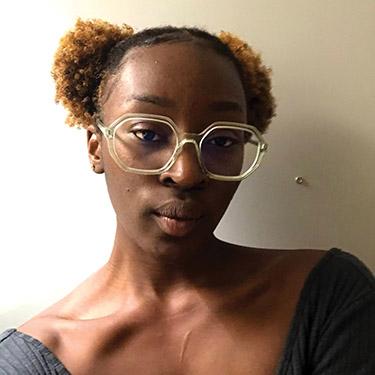 From a young age, Aaliyah Joseph ’22 loved listening to other people’s stories. In her hometown of Portland, Oregon, she is inspired to capture Black, Indigenous, and People of Color (BIPOC) in their authentic and passionate selves. Since being at Bryn Mawr, she has engaged in supporting the radical reconstruction of institutional memory to foster better acknowledgment of BIPOC contributions to the College and the long-term redistribution of the College’s wealth. At the core of her ethos are compassion; empathy; intelligence: and a love for people, communities, sustainability, Blackness, theory, and art.