After running away from home to join the Peace Corps, her life went to the birds.

Thirty-four years after Kate Wallace ’60 graduated from Bryn Mawr, she decided to “run away from home and join the Peace Corps.” She was separated from her husband, her kids were grown up, and her career as an environmental educator with the Massachusetts Audubon Society had come to a standstill.

What Wallace thought would be a three-year stint as a volunteer in the Dominican Republic became a lifelong commitment. Today she operates Tody Tours, the first—and still one of the few— organized birdwatching tours in the DR. She also collaborates with a community of naturalists, conservationists, and researchers on projects to protect the Island of Hispaniola’s remarkable ecosystem.

From Santo Domingo, Wallace talks about a journey shaped by a sense of adventure, a passion for the environment—and a little well-timed serendipity.

Why the Peace Corps?

My job with Mass Audubon wasn’t feeling secure, and a friend of mine, who also thought she was going to lose her job, joked, “Now it’s time to join the Peace Corps.” A few days later, I was in the teacher’s lounge, and I saw a magazine article about teaching abroad with the Peace Corps. Then, I was asking a colleague who was in charge of the Mass Audubon program in Belize about teaching opportunities there. He said, “Some of them are Peace Corp volunteers.” Well, the third time’s a charm. I applied to the Peace Corps, and here I am all these years later.

What did you do as a volunteer?

I worked with the Peace Corps’ sector for environmental education, and I trained tour guides and other people in and around the national parks to help them appreciate what they had here.

I’m more an educator than an ornithologist. I have a degree in early childhood education and ran an in-home day care for many years before moving on to Mass Audubon. I still give lectures in schools and take students on excursions. I recently gave a talk to fifth-graders in the French School, and they asked really good questions.

What made you stay?

I stayed in the Dominican Republic for the birds. People were coming to bird watch, but at the time, no one was doing bird tours, so I decided to become the local guide. There was a real need. I started noticing my tours showing up in the trip reports that birders would submit to the American Birding Association, and the Association would publish them. One thing led to another, and I got a website, and here we are.

Why is bird life on the island special?

There are 315 species of birds that can be seen in Hispaniola, and 32 of them are endemic— birds that you can’t see anywhere else in the world. That’s a lot, and it’s because the island has so many kinds of habitats with extreme differences in elevation. The highest mountain in the Caribbean is actually on this island, though there’s no way to get there except by serious hiking or mule. The areas where we go are cloud forest and pine forest, which are ideal habitats for birds.

I’d say the barrancoli. There’s one in Jamaica, one in Cuba, one in Puerto Rico, and two on this island. That’s it for the whole family. They’re so beautiful and charming and easy to see. Last year, I counted the number of photos people sent me on Facebook, and between January and June I received 400 photos of barrancoli. 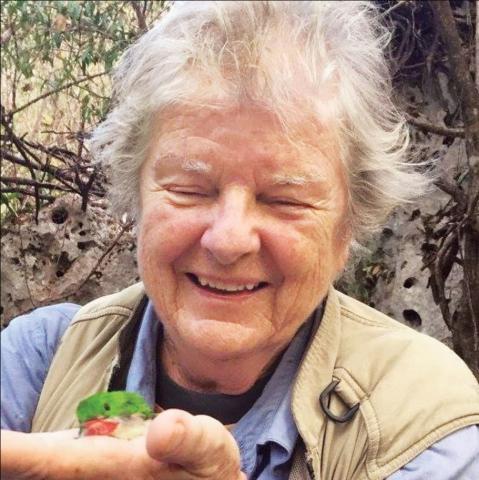