A Brief History of Water

Ancient beyond measure, Earth’s water is literally from another world.

Michelle Francl’s ontological musings about water began over a cup of tea she was enjoying at the Vatican Observatory, where the Bryn Mawr chemistry professor is an adjunct scholar.

Where does water come from? And just how old is the water in my tea? When I sit down for a cup, what am I drinking? Melted comets, recycled dinosaur pee, or something stuck together a millisecond ago?

10−12 seconds. The Big Bang, 13.82 billion years ago. For the first trillionth of a second, matter is equally balanced by antimatter, hence no mass. At 10−11 seconds, a momentary imbalance creates the potential for mass.

10−6 seconds. Gravity arrives on the scene, the universe (about the size of my teacup) inflates, and electrons—the glue that will ultimately hold molecules together—come into being.

1 second. Things cool down to a trillion degrees, and the thin quark soup that covers the universe (now solar system-size), begins to condense down into neutrons and protons. The periodic table starts—which makes those little hydrogens waving at me from my tea, what, 13.82 billion years old?

3 minutes. Over the next 17 minutes, protons and neutrons fuse to produce deuterium, helium, lithium, and a dash of boron. The periodic table might be filling out, but the nuclei are part of a seething mass of plasma, not at all suitable for brewing tea or making molecules.

700 million years. The oldest known oxygen in the universe can be traced to the galaxy SXDF-NB1006-2, found in the deep-sky region around the constellation Cetus. Arguably none of this oxygen is in my tea.

9.2 billion years. The molecular cloud that will become the solar system coalesces. In the protoplanetary disk encircling the sun, infinitesimal chunks of frozen hydrogen and helium, as well as bits of silicates and other minerals, grow more complex molecules—including water. These planetesimals slowly accrete into planetary-sized bodies, the source of the water in my teacup.

9.3 billion years. A mass of roughly 1,024 kg orbits the sun at a distance of 150 million kilometers: Earth. It has an ocean, formed as material from the core pushes up and releases what was trapped in the wet planetesimals that collided to form our planet. Ancient beyond measure, Earth’s water is literally from another world.

But are the molecules in my teacup truly 4.5 billion years old? Alas, no. The lifetime of any one molecule of water is a few milliseconds, as hydrogens pop on and off with alacrity. With  apologies to Heraclitus, the tea I made 20 minutes ago is not the tea I am  drinking now. Nor is it recycled dinosaur pee.

This article is drawn from a piece that appeared in Nature Chemistry(8). 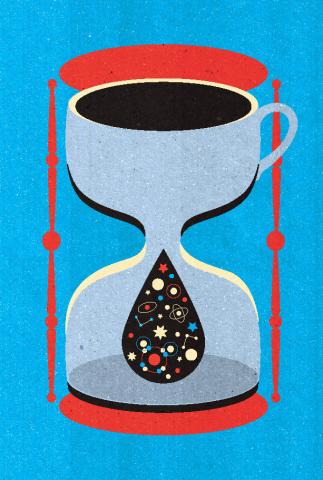 Department of Chemistry
More from Winter 2017