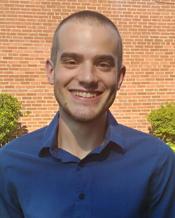 Joshua Carlson completed a B.S. in physics with a minor in mathematics at West Chester University of Pennsylvania. After graduation, he worked as a lab assistant formulating fluorine-based water, oil, and environmentally resistant fabrics and papers. While his experience in industry was chemistry based, his true passion lies in plasma physics and nuclear fusion energy research. He is currently a graduate student working with Prof. David Schaffner in the Bryn Mawr Plasma Lab and is looking forward to pursing a Ph.D. at Bryn Mawr College.

Carlos A. Cartagena-Sanchez is a Ph.D. candidate working with Dr. David Schaffner in the Bryn Mawr Plasma Laboratory. His research interests are in magnetized plasma turbulence systems and self-organized magnetized plasma configurations. Currently,  Carlos’ focus is on computationally modelling the dissipation physics of the turbulent plasma wind tunnel at the Bryn Mawr Plasma Laboratory. Carlos constantly seeks to improve by investigating different types of mathematics and scientific programming techniques to apply in his research. And, more recently, he dedicates time to learning physical skills and joined a CrossFit gym.

Tyler received his B.S. in physics with a minor in chemistry from Binghamton University, State University of New York. His fascination with physics stems from a desire to understand how the world around us works at fundamental levels. He is currently interested in Quantum foundations research as well as trying to understand the apparent asymmetry between matter/anti-matter in the universe. In his free time, Tyler enjoys playing soccer, brewing beer, snowboarding, and hiking. 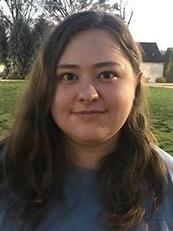 Alex Driehaus earned a B.S. in physics and a B.A. in Mathematics from Western Kentucky University. During her undergraduate experience, she worked in interdisciplinary research with both a nuclear physicist and, during a brief internship, a seed scientist. She is currently working with Dr. Asja Radja in biophysics and pattern formation. In her free time, Alex enjoys reading, the semi-occasional cat nap, and general shark appreciation. 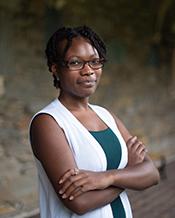 Olivia received her B.S. in Physics with a concentration in Astrophysics at the University of North Carolina at Chapel Hill. As an undergraduate student, she was an active member in Women in Physics (currently named Visibility in Physics) becoming president of WiP her last year. She joined a research group focusing on galaxy evolution in the southern compact group (SCG). As a graduate student, she works on tracer particle simulations where she studies the dynamics of a star cluster residing at a stable Lagrange point. For more information, see her website. 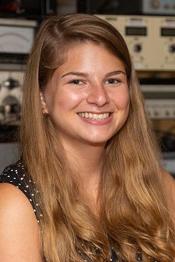 Sarah E. Spielman received her B.S. in Physics in 2021 from Denison University. As an undergraduate, her research focused on high-precision laser spectroscopy of negative ions. As a Ph.D. student at Bryn Mawr College, she is currently working with Dr. Michael Noel, studying dipole-dipole interactions in ultracold Rydberg atoms. Her current research interests combine both experimental and computational techniques to investigate the thermodynamic evolution of quantum many-body systems. In her free time, Sarah enjoys hiking, swimming, playing her guitar, and cooking.