Students in last semester’s Writing for Radio and Podcasts course were able to learn from a practicing expert as Molly Seavy-Nesper ’12, digital producer for NPR’s Fresh Air with Terry Gross, taught the course for the first time.

A Cities and French double major at Bryn Mawr, Seavy-Nesper, who has been at Fresh Air for 10 years, drew upon her own experience as a liberal arts student who ended up working in radio to design the course. 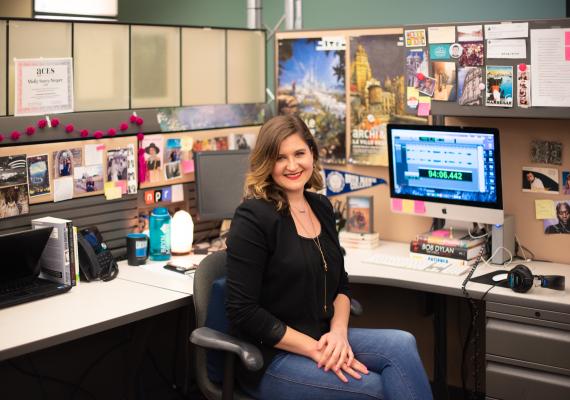 “I thought about the things I wish I had known about audio, journalism, and writing before jumping into the deep end of a national show.”

“I thought about the things I wish I had known about audio, journalism, and writing before jumping into the deep end of a national show,” says Seavy-Nesper. “We covered topics ranging from how to structure a narrative, to how to sound like yourself on air, to how to get good tape from an interview, and lots more.”

Wendy Qu ‘23, is a biochemistry & molecular biology major and Radio and Podcasting was her first creative writing class.

Qu, who became an EMT in 2020, and has been volunteering with Narberth Ambulance since her junior year, decided to do her final project on emergency medical services.

“My podcast was titled Answering the Call," says Qu. “I learned a lot about how to conduct a successful interview, which is not easy to obtain without thoughtful preparation. Audio and sound editing is also challenging. It’s very much like a difficult puzzle. But in the end, unlike a puzzle, it is subjective on what should go where.”

In producing her podcast, Qu spoke with Narberth Ambulance executive director Al Davey on his experiences in EMS and incorporated information about the history of emergency medicine and America's first paramedics, an all-Black team from Pittsburgh.

“I thought Molly was truly a great professor. She has so much experience actually working in the industry,” says Qu. “This was my first creative writing class, but it was definitely one of my favorite classes I’ve taken.”

Dave Davies talked about his years as Philadelphia's premiere political reporter and fill-in hosting Fresh Air. NPR arts and culture reporter Neda Ulaby ’93 talked about how to turn hours of tape into a short reported story. Seth Kelley from Fresh Air talked to students about the basics of audio editing. Maiken Scott, host of the health and science show The Pulse, talked about WHYY’s podcast Serum, and Fresh Air’s Ann Marie Baldonado and Thea Chaloner discussed interviewing, voicing, and how to pitch stories.

“All of our speakers remarked on what an engaged group this was, so it was a real pleasure to bring them to campus,” says Seavy-Nesper. “It has been a thrilling experience for me to see the students begin to think about and listen to audio in a new way. And finding your authentic voice—both literally and in writing—that’s a lifelong skill.”

Writing for Radio and Podcasts has previously been taught by Professor and Creative Writing Co-Director Daniel Torday, who often included Seavy-Nesper as a guest speaker. The class is likely going to be offered again in the fall of 2023.

Bryn Mawr's Creative Writing program is designed to prepare students who might wish to pursue advanced training in their fields and are also for those who want to broaden their academic studies with work in the arts that is conducted at a serious and disciplined level. Introductory and advanced courses in poetry, fiction, creative nonfiction, playwriting, and screenwriting are available.