Shakespeare Performance Troupe Puts on 'The Importance of Being Earnest'

The Shakespeare Performance Troupe (SPT) is Bryn Mawr’s largest student-run acting and performance troupe. They’re currently in rehearsals for the fall production of The Importance of Being Earnest, running Nov. 18-20 in Rhoads Dining Hall.

Excitement has been running high. After a long year and a half spent entirely on Zoom, cast members are excited to perform with friends. "Getting to act onstage again is incredibly special given the past two years," says Alan Wiborg ‘22, playing the role of Algernon.

As the show approaches, the cast and crew alike are both working hard and building new camaraderie. “I really love the cast!” says Bankston Creech ‘22, playing the role of Jack. “I think the fact that we genuinely enjoy being with each other shines through in the comedy.” 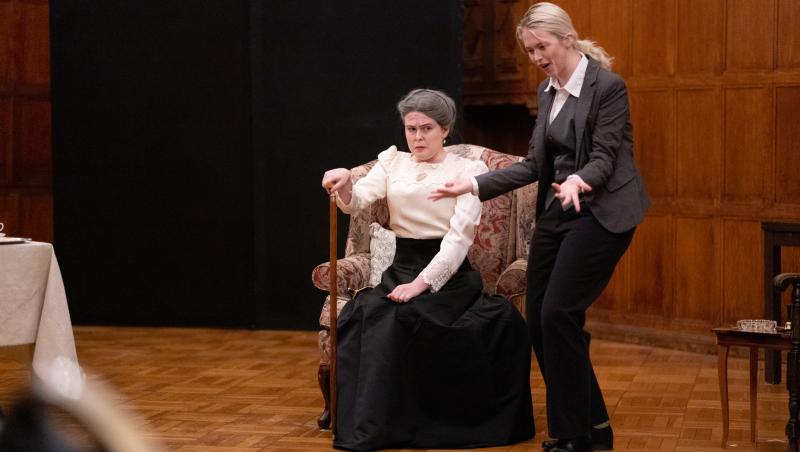 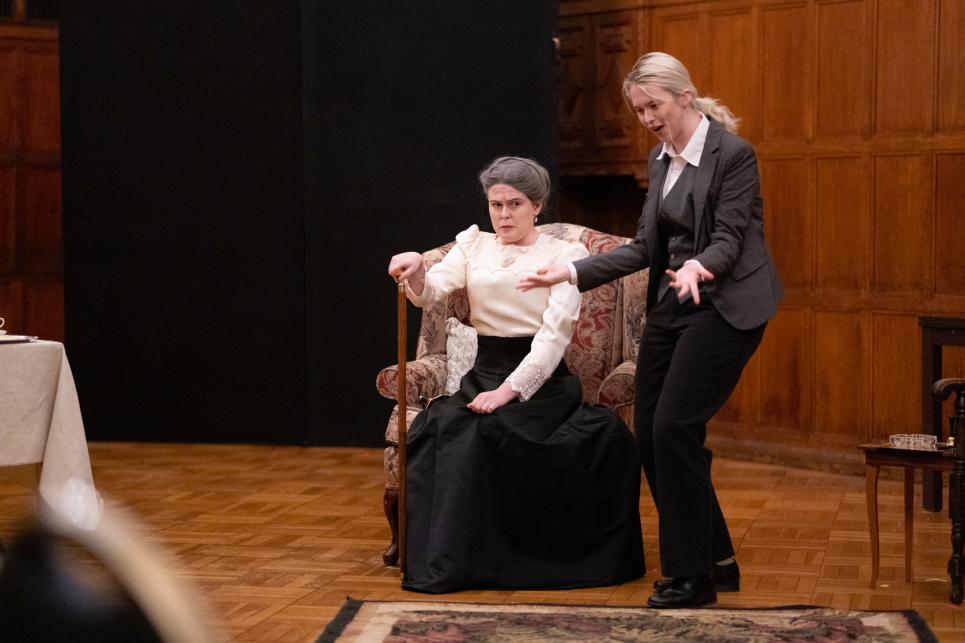 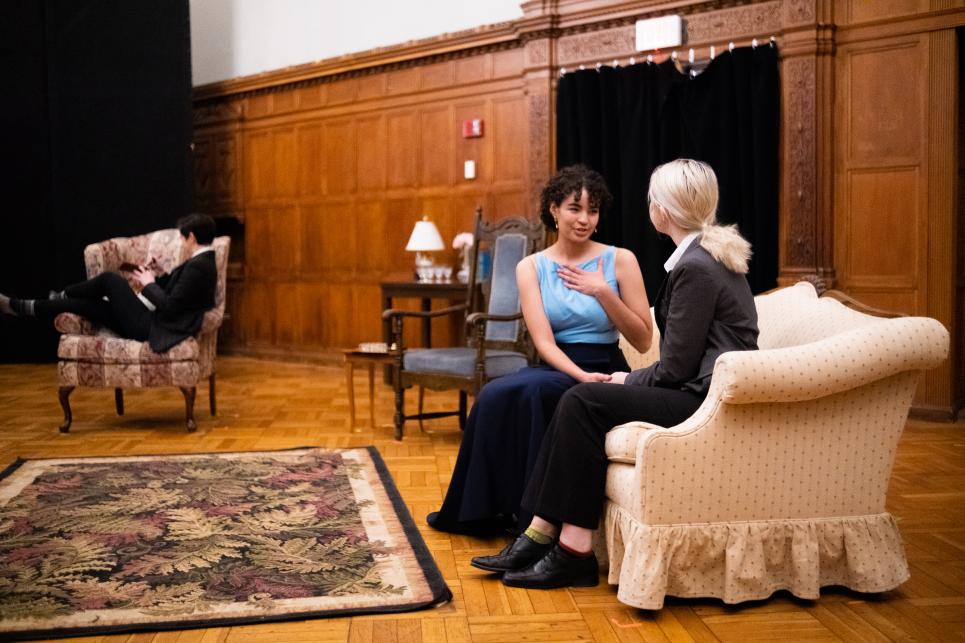 Jack talks with his potential betrothed Gwendolen (Sachi Bower '25) as Algernon looks on. 2 / 5 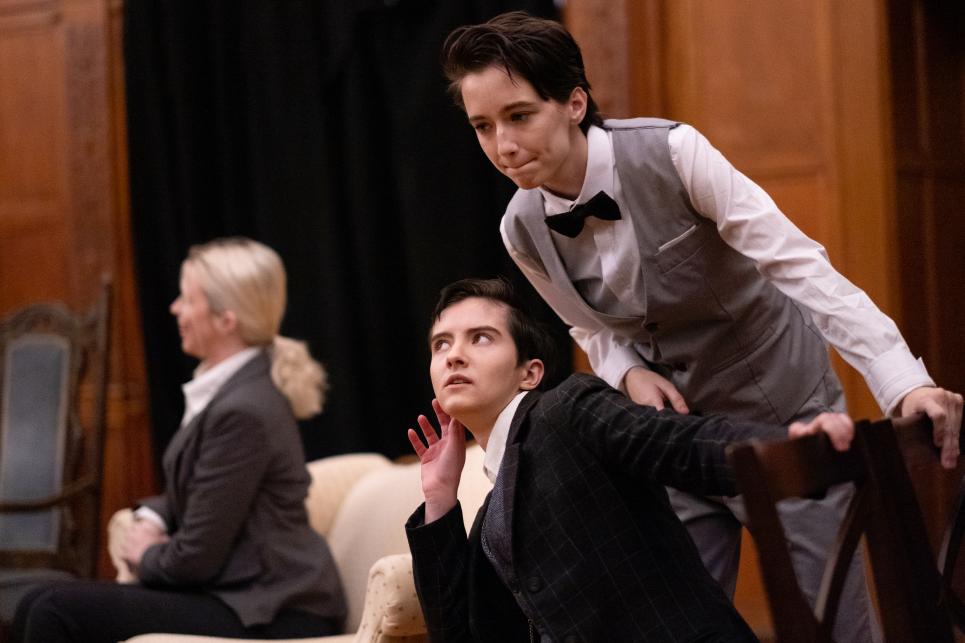 Algernon spies in on the proposal with the help of his manservant Lane (Leela Smelser '24). 3 / 5 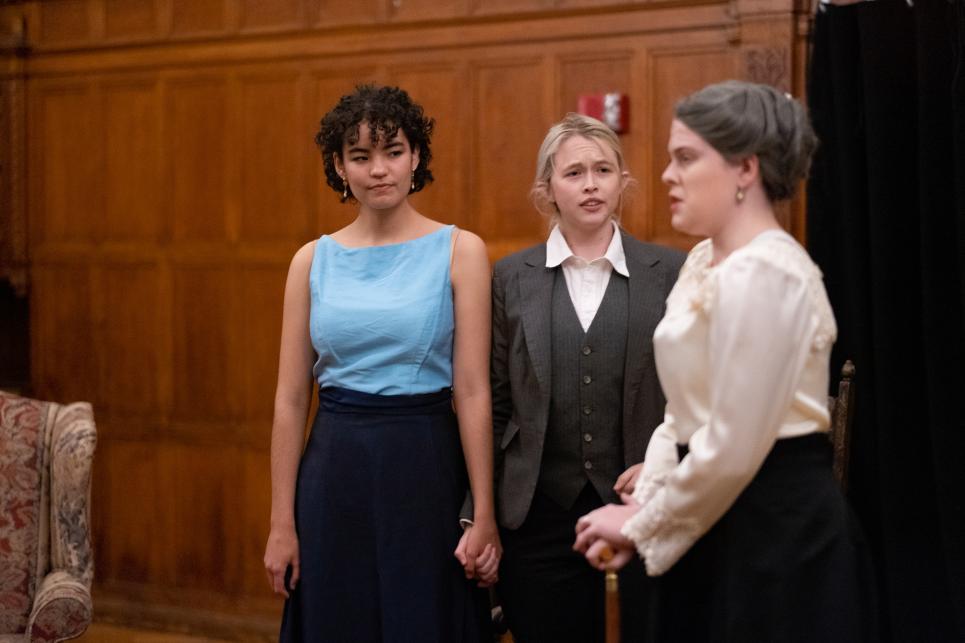 Jack and Gwendolen try to talk Lady Bracknell into accepting their engagement. 4 / 5 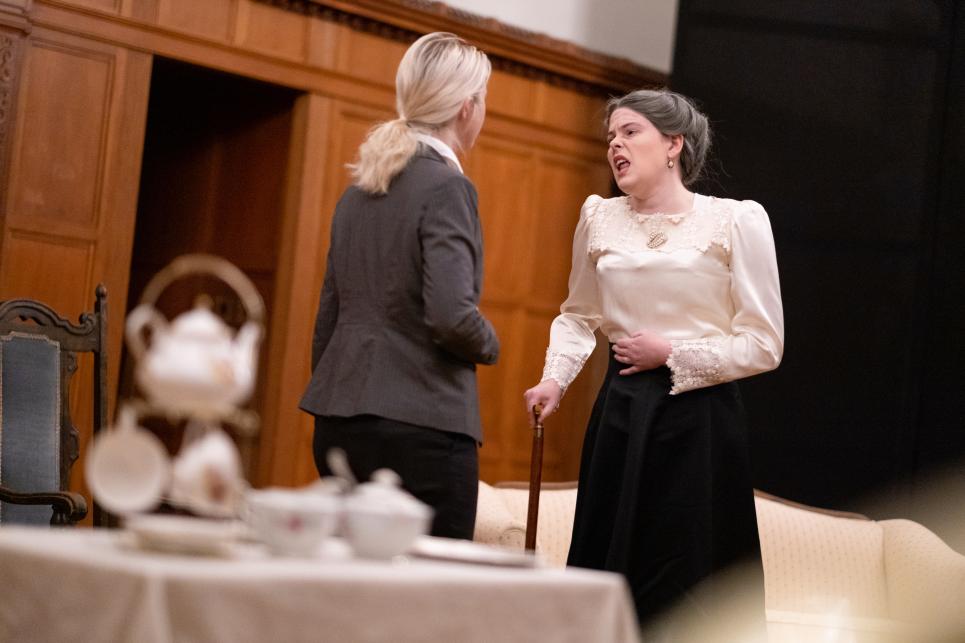 During most semesters, the troupe puts on two shows, each one generally containing eight to 14 members plus crew. Due to the short list of shows this year, Earnest boasts an especially large crew, and the group has focused heavily on bonding through tech week. "I love the the self-directedness of it all... Everyone trains and supports everyone else!" says Abby Pasternak '25 of the experience.

SPT in its current form has been in existence since at least 2001 according to their production history. As an entirely student-run troupe, the club utilizes a 3,000 word constitution and a nine-member full board to govern, ensuring shows run smoothly. This requires heavy coordination on the part of students.

Earnest director Jordan Beck ‘22 has been with SPT since her first year. Though this is her first time directing, she says the experience has been incredibly exciting.

"The opportunity to work with peers like this has been really important to my college experience," she says. "Sure, it can be tough a lot of the time, but working on something challenging together creates a camaraderie that I just don’t get in other aspects of my life."

Jordan says her favorite part of directing is being surprised. "Sometimes I’ll direct an actor in a certain way that I’m unsure about, and the risk will add new energy to the scene. Other times, actors will ask 'can I try this?' and more often than not I find myself clapping and laughing, yelling 'Keep that!' after they take the chance on a weird or different choice than they would’ve usually made."

As well as the longer crew list, on Nov. 5, SPT put on a Shakespeare Revue for parent’s weekend, allowing those not cast in Earnest to still participate in the troupe. Videos are uploaded to their YouTube channel.

Next semester, SPT will run an abridged version of Henry VI Part One focused around Joan of Arc, directed by Elizabeth Hamilton ‘23, and a production of Tom Stoppard’s Arcadia, directed by Maxwell Brenton ‘23.

The Importance of Being Earnest opens on Thursday, Nov. 18 at 7:30 p.m. in Rhoads Dining Hall, and will run at the same time both days of the weekend. You can find more information about student theater on the Shakespeare Performance Troupe’s website.