Herodotus and Thucydides are considered by many to be the earliest Western historians. Herodotus’ The Histories chronicles the Greco-Persian wars of 498–448 BCE and Thucydides’s History of the Peloponnesian War chronicles the war between Sparta and Athens from 431-404 BCE.

But history has not been equally kind to the two historians.

The History of the Peloponnesian War remains a staple of classrooms and Thucydides has come to be seen as a clear-eyed realist reporting the facts as they happened. The Histories remains an essential text but its many digressions and flights of fancy have kept many scholars from examining its relevance in the modern world.

However, in his latest book, Herodotus in the Anthropocene, Joel Alden Schlosser, chair and associate professor of political science, uses the lens of Herodotus’ Histories to problematize and elevate human ways of interacting with the world. What is political? How do we inquire about it? How do we engage with it? 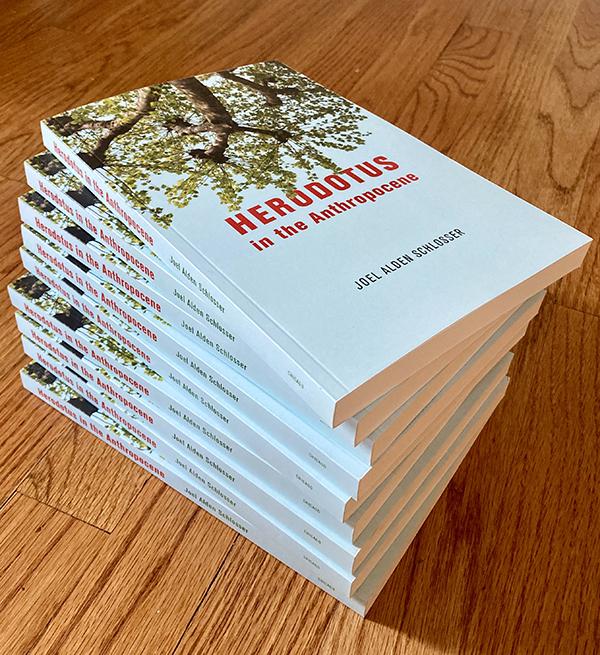 Looking beyond inevitable ties to governments and state institutions, Schlosser articulates “an ecological approach to norms” that centers the human and the non-human world by framing norms—customs, rituals, and practices that people undertake together in community—as a source of collective power that is political, transformative, and ultimately, the path toward realizing what he calls “earthly flourishing.”

Why Herodotus and why The Histories?

There are lots of different stripes of political theorists—those concerned with theoretical problems, those investigating the logical ways to deal with them—and I'm someone who loves books. There's a part of me that is always thinking about books as whole objects that we can think with. As I say at the beginning of the acknowledgments, part of reading The Histories is about living with this book and seeing how it becomes fruitful across time for thinking about problems.

The first thing that I wrote about Herodotus was an article published in Political Theory called “Herodotean Realism,” where I argue that Herodotus has his own kind of realism, a realism that's clear about how it is that everything that we say and understand is embedded in stories that are learned from some particular place and have a particular plot. We can't just say we are realists and we only deal with facts because we always fit the facts into narratives in an attempt to make sense of things. That is the Herodotean perspective: he’s showing us the process of learning these stories and putting them together.

Why “In the Anthropocene”?

I think if I had written this book 10 years ago it wouldn't have been on the Anthropocene. I began within the domain of realism and international relations and then I wrote some yet-unpublished things on miracles, beginnings, and materialism. However, as I got deeper into Herodotus’s ontology—his understanding of what things are and how being works—it became clear that I couldn't just work with states in relationship to each other. I needed to be more material, more dynamic, more philosophical in certain ways.

In your book, you talk about isêgoria. Can you explain a bit?

What Herodotus calls isêgoria, or equal voice, names, in my view, the key practice for supporting inquiry because it's what allows the voices that sustain inquiry. Inquiry is built on talking to other people. The relationship between the inquirer and the respondent is that of hearing and telling stories and that cannot happen in relationships of domination or relationships where some voices are suppressed. Asymmetric relations make it dangerous for you to tell the true facts of the situation as you see it to another who can punish you if they disagree with you. But if there is isegoria, that risk is reduced because everybody is encouraged and allowed to contribute their opinion.

Isegoria—the combination of isos (equality) and agora (the marketplace and the meeting place)—provides a tangible way of envisioning how liberation can happen in a space where people are on the same footing and sharing life together in the sacred space that is formed by the marketplace. I'm not saying that we just have one big space and everybody shouts at each other. Obviously, we need infrastructure and a set of norms to make equal voice work, but that, I think, would be the sort of Herodotean wisdom that could be brought to the present.

Can you describe “Herodotean wonder”?

Herodotus exudes a respectful curiosity that isn't pushy or aggressive but is deeply interested and interrogative when he encounters people with cultures and practices different from his. When Herodotus encounters something “strange,” he exudes this wonder. “Strange” is a translation of the Greek word atopos, which literally means out of place and not fitting. Instead of simply othering that which is different, Herodotus’s interrogative inquiry creates a questioning among and across different people, non-people, and non-humans. This wonder that Herodotus exhibits is also something that I think is elicited when you read Herodotus’s work.

What do you mean by “earthly flourishing”?

Earthly flourishing describes an equilibrium where humans and non-humans flourish equally well. Human beings can create norms that support free and flourishing communities but these norms must be responsive to non-humans, meaning they need to work with rather than seek to control or dominate entities like rivers, oceans, weather, and non-human animals. Herodotus also includes gods, fate, contingency, and cosmic principles such as reciprocity as essential to earthly flourishing. Because non-humans play such integral roles, earthly flourishing is not simply a human achievement. Although human beings can do a great deal to advance it—and isegoria provides an essential political ingredient—our efforts cannot guarantee the flourishing we seek. We need to continue to wonder, to develop more responsive norms, and to remain open to what non-humans can teach us about how to live in the Anthropocene.

Joel Alden Schlosser is a political theorist and his research follows the late Sheldon Wolin (his teacher’s teacher) by seeking to make the history of political thought relevant to the present. In all of his research he strives to provide a way to understand and to criticize contemporary political life by using the concepts and vocabulary that since antiquity have sustained concern for what Wolin called “the possibilities of collectivity, common action and shared purpose.” This commitment has led to sustained research into the ancient Athenian democracy as well as contemporary democracies, in particular the latter’s ongoing struggles with inclusion, diversity, and equality. Employing a range of humanistic approaches, Schlosser draws on philosophical, historical, and literary sources to open new ways of theorizing contemporary political phenomena such as race, neoliberalism, critique, hope, inquiry, and fantasy.

Want to take a deeper dive? Check out the extended interview!