What’s happening at your internship? We would love to hear what kind of work you are doing!

This summer, I’m conducting research on the forked fungus beetle (Bolitotherus cornutus) at the Mountain Lake Biological Station in Pembroke, Virginia. Generally, my workday consists of doing fieldwork from 6:30-11:30 AM and working on my experiment from 1:30 PM to as late as 6:00 PM. In the mornings, I’m gallivanting around the woods looking at fungus brackets growing on marked logs and snags containing populations of beetles and recording data. In the afternoons, I’ve been collaborating with a UVA graduate student, Clara Stahlmann Roeder, on her dissertation. She is testing to see if there is a winner/loser effect among male forked fungus beetles, which occurs when a beetle’s chance of winning a fight is directly affected by their recent defeat or victory in a previous battle. In other species, it has been demonstrated that recent victors have a higher chance of winning and a loser will have a lower chance of winning after they have just fought. However, this phenomenon has yet to be tested among our study species until now. The experiment that I created in conjunction with Clara’s dissertation examines whether or not neutral male beetles can detect whether another individual has won or lost a fight through chemical cues. I based my question off of a previous student’s research where she tested if female beetles were able to distinguish a winner or loser based on the chemicals they produced. 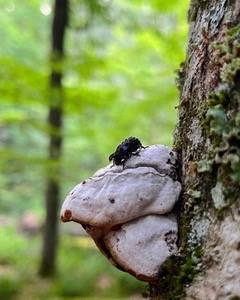 Why did you apply for this internship?

I asked to join Swarthmore College Professor Vincent Formica’s lab because I wanted to pursue my interest in animal behavior and I had a great experience in his class, “Evolution of Animal Societies” last fall. During this time, I decided that he would make a great mentor for me to explore animal-based research for the first time.

Was this internship what you expected it to be?

Before arriving at the station, I was studying abroad in the city of Granada, Spain, where everything was within walking distance and the only green space in the area was a medium-sized park. The thought of transitioning from that to living on the top of a mountain where the closest town was a 30-minute drive away was… intimidating. Especially because, contrary to my environmentalist vibes, I generally think of heavily wooded areas to be cesspools of creepy crawlies like ticks, spiders, and mosquitoes (ESPECIALLY mosquitoes) - all of which I have an intense aversion to and had imagined I’d be encountering in swarms during fieldwork. Normally I wouldn’t have minded but we’re not allowed to wear bug spray here because it changes invertebrate behavior (including that of the beetles whose behavior we’re testing). The few days leading up to my arrival at Mountain Lake were thus filled with loads of packing, purchasing of Afterbite, and worrying about my future living in isolation as a forest-hating hermit living in a forest. To my surprise and delight however, I’ve experienced a rich social life from interacting with all of the brilliant scientists working here and have found that there really aren’t as many mosquitoes as I’d imagined. Being here has given me the opportunity to connect with nature more deeply as I’m learning to appreciate the beautiful landscape around me, all the different species that live here, and the amount of complexity involved in studying them. On top of that, I’ve been filling my free time playing volleyball, roasting marshmallows, hiking, and having game nights with people ranging from undergraduates to well-established researchers with PhDs. The friendly atmosphere here has made me feel at-home while giving me the space to explore the world of ecology that, since now, I’d only skimmed the surface of.

Can you give us three adjectives and three nouns that describe your internship experience?

Social - The community here is small and tight-knit so I’m constantly interacting with people in social settings in addition to collaborating with my teammates during fieldwork and experiments.

Clumsy - I can’t tell you how many times I have tripped and fallen, how many beetles I’ve dropped on the ground and lost in the leaf litter, or how many little mishaps I’ve had while conducting my experiments. And I also can’t tell you how okay it is to make mistakes because EVERYONE does, and you learn so much from them.

Busy - There are days when I work from 6:30 am to 6:00 pm with only a 1.5-hour break during lunch. This isn’t usually the case, but I’ve definitely been busy. I am, however, enjoying what I’m doing and still have plenty of time outside of work to do other things.

Beetles - So. Many. Beetles.

Walking Stick - After the first couple of weeks here, I found myself the most superb walking stick to help traverse the steep and treacherous terrain of the mountainside during fieldwork. And immediately lost it. I then found a slightly less superb but still great walking stick that I’ve been using every single day since. I love this stick.

Love - I love the work that I’m doing here, love the friends I’ve made here, love that I get to be in nature, and love that I’ve learned so much about myself while living here. This is a truly special place that I feel privileged and honored to be a part of.