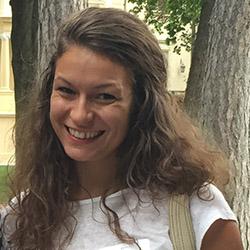 Nava Streiter | GSAS Writing Specialist
Nava is a doctoral candidate in history of art. She provides consultations to graduate students from the Graduate School of Arts & Sciences on writing tasks of any kind: coursework, conference papers, articles, dissertations, and job market materials.

Alexa Lebrón-Cruz '22 | Psychology / Pre-Med
Alexa is a pre-med student who enjoys reading "way too many studies" in her spare time. In addition to working for the Writing Center, she is also an experienced research assistant, first trumpet player for the Swarthmore Wind Ensemble (before the pandemic), and a commissions artist specializing in digital cartoons. Alexa can help with all your writing needs and is excited to help you with your work!

Anna Hsu '22 | Philosophy
Anna is a night owl born and raised in Central Jersey. She is a big fan of strawberry banana smoothies, thunderstorms, video games, and her cat Mocha.

Arya Yue '22 | Biology
Arya is happy to be back on campus and at the Writing Center! She is a senior Biology major interested in ecology and wildlife conservation. Having lived in China, Singapore, and the US, she loves travelling and experiencing different cultures. She dances with Choom Boom and enjoys dancing urban or hip hop.

Bharati Ganesh '22 | Political Science
Bharati is happy to be back for another year at the Writing Center. She enjoys collecting political campaign buttons, eating Nutella straight from the jar and reading The Atlantic. Outside of the Writing Center, Bharati competes in mock trial competitions, serves on SGA and performs with BMC's sketch comedy troupe.

Clara Chamorro '22 | Anthropology
Clara is so excited to be working at the Writing Center this year! She enjoys playing loud music with her band, collecting Kirby pins, and doing jigsaw puzzles. Clara’s favorite thing about the Writing Center is helping people brainstorm. Outside of the Writing Center, Clara does sketch comedy with Spoon-Fed and talks endlessly about anthropology to anyone who will listen.

Emily Shein '22 | Philosophy and German
**Designated German tutor**
Emily is from Upstate NY, and she is so excited for her third year of working at the Writing Center. When she’s not tutoring, she can be found trying to convince her friends that pickled tomatoes are the superior pickle. Emily is excited to spend another year helping other students get excited about writing!

Jordan Beck '22 | Literatures in English
**Designated French Tutor**
Jordan is so excited for her third year at the Writing Center (and her second year as a designated French tutor)! She enjoys good tea, dinosaurs, and anything written by N.K. Jemisin. When not in the Writing Center, Jordan spends her time dancing, acting, and playing Dungeons and Dragons with her friends.

Lizzie Allen '22 | History, minor in Education
Lizzie is thrilled to be at the Writing Center for her second year! She’s excited to read more than just history papers and to help other people enjoy the writing process as much as she does. Lizzie loves baking homemade pizzas in her backyard oven and Succession and hopes to compete on Jeopardy one day.

Katherine Santarpia '22 | Spanish and Political Science, minor in Psychology
Katherine is more sloth than person, but when she resumes human form, you can catch her with her owl-eyed glasses and increasingly vibrant outfits.  At this moment, she is most likely admiring her seasonal animal figurine collection (from her sister!), discussing religion or faith (no matter how irrelevant to the original conversation), or laying sprawled on a carpet somewhere (as is her natural habitat).

Mel Cleary '22 | Literatures in English
Mel spends a lot of time wishing they could be running, hiking, or hanging out in a forest, but the Writing Center is a close second. While on campus, they fence sabre with Bryn Mawr's fencing club, think about all the books they don’t have time to read, and miss their two cats. Mel is unsure if the pen or the sword is mightier, but they’re a big fan of both.

Sydney Chun '22 | Literatures in English, concentration in Gender and Sexuality Studies
Sydney is from the chaparral, specifically Greater Los Angeles. She is a Mellon fellow studying 19C American literature and the body. She enjoys making sandwiches, visiting the farmers’ market, and recently, baking sourdough. She loves to talk about TV and breaking down the parts of an introductory paragraph!

Talia Horowitz '22 | Psychology
Talia is so excited to be joining the Writing Center this year! Talia is particularly interested in developmental and clinical psychology and that intersects with Deaf Studies. Aside from working at the Writing Center, Talia enjoys reading outside, going on foraging walks, and playing with her dog, Ferris Bueller.

Aanandi Murlidharan '23 | Anthropology
Aanandi is a tea enthusiast, who stans way too many kpop groups for her own good. Ask her which ones and she’ll be your friend forever. When she’s not scrolling through Tiktok or checking Erd’s menu in hopes of seeing mac and cheese, you can catch her singing with the Acabellas or dancing for Choom Boom.

Ananya Hindocha '23 | Sociology and Political Science
Ananya is excited to be a writing center tutor this year. She's from the San Francisco Bay Area, and while she misses the sunshine, she's excited to see everyone in person. When she's not working or in class, you can probably find her dancing with Bounce, boxing, or doing karaoke on her dining hall shifts even though she sucks at singing.

Catherine Lin '23 | Computer Science
Catherine is excited for her first year as a Writing Center tutor! She's a Taiwanese-American dual citizen, history enthusiast, and collector of random trivia. Outside of the Writing Center, she can often be found with a cup of tea, debugging code, working on fiction projects, or making her way through her stockpile of book recommendations.

Elle Thompson '23 | Literatures in English and Political Science
Elle is so excited to start her second year of work at the writing center! When not working at the writing center, you can find her in the communications office or doing design with Nimbus Magazine. She enjoys Shakespearean acting, political discourse, and reading fantasy (but the kind that's by women). Her friends would describe her as "full of opinions” and “listening to too much Mitski.”

Koren Woznicki '23 | Literatures in English, minor in Cities
Koren is very excited to be working in the Writing Center this year. Hailing from Lambertville, New Jersey, Koren enjoys socially-distant book clubs, re-watching Gilmore Girls, cringing at old pictures from her pageant queen days, and playing on the Bryn Mawr soccer team. When she isn't on Applebee field or a Zoom call, you can find her reading or trying to find a way to get to the nearest beach.

Linda Chen '23 | German and History of Art
Linda is a hardcore cinephile with an unquenchable passion for critical theories too often dismissed as academic navel-gazing. She spends a good part of her free time defending avant-garde art, midnight coffee, or the outrageous amount of semicolons in nearly everything she writes, and squanders the rest of it wandering around Park in hope of discovering her next favorite couch to crash on during finals week.

Rachel Gass '23 | Environmental Studies
Rachel is excited to be back for another year at the Writing Center. A Chicago native, Rachel is a big Cubs and Bears fan and tries to watch as much football as they can during the year. When they’re not reading about gender theory or foodways in Carpenter, you can find them drinking tea, watching movies, or working at Haverfarm.

Zoë Kaufmann '23 | History and History of Art
Zoë is an avid reader and writer from Bethesda, Maryland. She particularly loves WAMU (her hometown NPR station), early modern Jewish history, and fantasy novels written by women. She’s so excited to start work at the Writing Center this semester!

Graziella Pierangeli '24 | Undeclared
Graziella is very excited to be working at the Writing Center this year! She is originally from Edwards, Colorado. She is a big fan of Pride and Prejudice, hiking, and porcini mushrooms.

Lillian Ernst '24 | Undeclared
Lillian is a sophomore from the San Francisco Bay Area with an intended major in International Studies and a love for languages. She spends her free time thrifting and binging political dramas, but can also be found serving on SGA and playing the clarinet! She is eager to help craft strong arguments and bolster the voices of her peers through the Writing Center this year.

Regan Riehl '24 | Undeclared
Regan is thrilled to join the staff at the Writing Center! She is from central New Jersey and an intended English major with a minor in creative writing. She loves writing short stories, drinking chai tea lattes, and watching new plays. Outside of the Writing Center, Regan enjoys acting, reading, spending time with friends, and performing with Spoon-Fed, BMC's sketch comedy troupe.

Sofia Diaz '24 | Undeclared
Sofia studies political science, literature, and philosophy. She is excited to be studying on-campus for the first time after a year of Zoom classes from her home in Haverford, PA. Sofia enjoys helping students in all stages of the writing process, from preliminary outlining to final edits, and looks forward to a great first year at the Writing Center!

Tessa Famatigan '24 | Undeclared
Tessa hails from El Paso, TX, and unapologetically inserts "y'all" into every interaction she has. When she isn't impulsively lying down on the grass to stare at the sky, drinking tea (with oat milk and honey), hysterically cry-laughing with her friends, or talking about her dog, she can be found singing with the Acabellas or having fun with Greasepaint! With a special appreciation fro the artistry of punctuation and the originality of every writer's voice, Tessa is beyond excited to be a tutor in the Writing Center and can't wait to work with you!