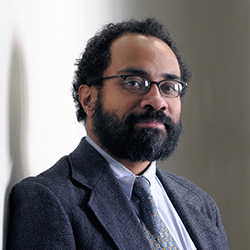 Ignacio Gallup-Díaz specializes in the history of the early modern Atlantic World. His courses explore how European conquest and settlement of the Americas, coupled with the forced migration of Africans and the continued presence of Amerindian communities, led to the evolution of complex societies.

His recently published monograph, The Door of the Seas and Key to the Universe: Indian Politics and Imperial Rivalry in the Darién 1640-1750, (Columbia University Press), examines the interaction between competing European colonizers and Panamá's Kuna people. The text is published as an electronic book in the Gutenberg-e series of scholarly monographs. Gutenberg-e, a publication project directed by Columbia University Press and the American Historical Association, provides access to its texts on the Internet at gutenberg-e.org.

Gallup-Díaz is now at work on research projects that explore the development of autonomous African and indigenous communities in Panamá and Suriname during the period of colonization (1500-1800); the intellectual underpinnings of early English expansion; and poetical depictions of the Spanish attempts to subdue eastern Panamá and its peoples.