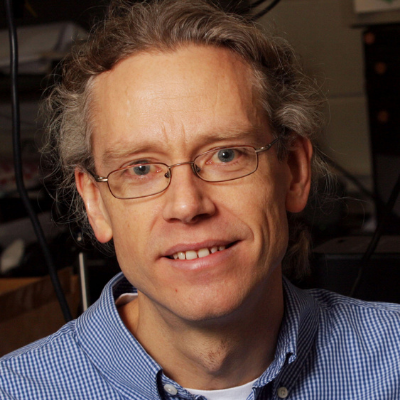 Michael received his bachelor's degree from Whitworth College in 1988.  He was granted a Ph.D. from The Institute of Optics at the University of Rochester for research on "Atomic Electron Wave Packet Interference and Control," which was supervised by Professor Carlos R. Stroud, Jr.  In 1996 he joined the research group of Professor Thomas F. Gallagher at the University of Virginia in the role of Postdoctoral Research Associate.  He joined the faculty at Bryn Mawr College in 2000 as an Assistant Professor of Physics.  His current research interests include the study and control of long range interactions between atoms in an ultracold sample of highly excited atoms.

Current research focuses on an experimental study of ultracold samples of highly excited atoms.  The impact of these experiments is quite broad, with connections to condensed matter physics of spin glasses and crystals; low temperature atomic, molecular, and optical physics involving many body interactions; and low temperature plasma physics.  Specifically, we study the properties of a novel type of "designer solid" consisting of a sample of ultracold Rydberg atoms that are strongly coupled by dipole-dipole interactions.  Rydberg atoms have one highly excited electron, giving them exaggerated properties such as extreme sensitivity to electric fields and large polarizabilities. Recent studies of amorphous samples have investigated the nature of the resonant energy transfer among the atoms forming a strongly coupled spin glass. This energy transfer can occur over a very long range and involves complicated many body interactions.  These "solids" differ from typical solids in that the spacing between atoms is quite large yet the couplings remain strong because of the exaggerated properties of the Rydberg atoms.  We will manipulate the energy transfer in this designer solid by controlling the atomic sample using optical lattices, inhomogeneous fields, and localized Rydberg excitations to form a novel type of strongly coupled spin crystal.  We will also investigate the potential for using this strongly coupled spin system to produce the entanglement necessary for quantum computations.

Funding for this research is provided by The National Science Foundation (Collaborative Research:  Quantum Dynamics and Control with Ultracold Rydberg Atoms #2011610)