Professor and Chair of Mathematics on the William R. Kenan Jr., Chair 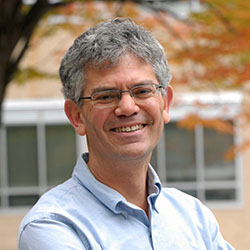 My area of research is chaotic properties of dynamical systems. Systems that I am particularly interested include geodesic flow on surfaces and billiards.

This picture shows an unusual shaped sphere which exists in three dimensional space whose geodesic flow is ergodic.

Together with my students, I have worked to develop ways to bring mathematics to a wider audience in interesting and understandable ways.

In spring 2010, I taught a math seminar on Math Modeling and Sustainability in which students did service learning projects in which they used mathematics to analysize problems on sustainability on campus and in the community.

After many years of dreaming about it, in April 2016,  I hosted a public event to create the World's Largest Sierpinksi Triangle out of K'NEX pieces at the Wagner Free Institute of Science.

I have been involved in a number of NSF funded projects to improve math and science education as well as teaching a course called Changing Pedagogies in Math and Science Education.

Principal Investigator of the Bryn Mawr - Haverford Noyce Program, which aims to encourage math and majors to go into teaching, particularly in high-needs school districts. To support STEM majors at liberal arts institutions to go into teaching, we have developed a summer program in math pedagogy at Brown.

Principal Investigator of the Philadelphia Regional Noyce Partnership in which the seven institutions in the region with Noyce programs (Bryn Mawr - Haverford, Drexel, La Salle, Penn, Saint Joseph's, and Temple) will exploit synergies to develop joint programming to support the Noyce scholars in the Philadelphia region.

Co-Principal Investigator for a NSF funded START planing grant which aimed to support teachers and school districts in teaching (environmental) sustainability to their students.

Co-Principal Investigator for the Math Science Partnership of Greater Philadelphia (MSPG), which received a $12.5 million dollar grant from the National Science Foundation to improve pre-college math and science education.  Bryn Mawr and Haverford Colleges are core partners in the MSPGP.  I am a Board Member of the organization 21st Century Partnership for STEM Education (21PSTEM), which is a non-profit successor to the MSPGP that was founded in 2007.

Starting in fall 2013, I became the Director of Bryn Mawr's Environmental Studies program.

Organizer of the Tri-Co Mellon group on Math Modeling in 2011-12.